Chautauqua Institution, where the author was due to speak, was founded in 1874 and is dedicated to fostering civil dialogue on religious, social and political issues 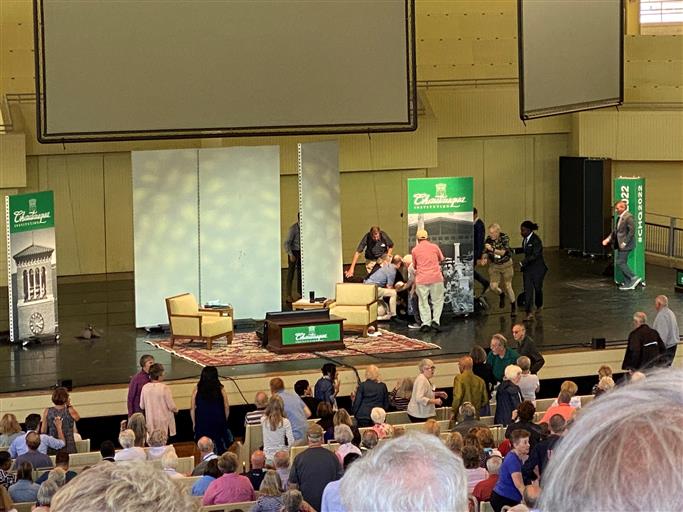 Author Salman Rushdie is helped by people after he was stabbed on stage before his scheduled speech at the Chautauqua Institution, Chautauqua, New York, US, on August 12, 2022, in this picture obtained from social media. Charles Savenor/LOCAL NEWS X/TMX/via Reuters

Before Salman Rushdie arrived on Friday, the bucolic New York retreat where the author was due to speak had arranged for a law enforcement presence at his lecture, mindful that the security might be needed for a man who faced death threats.

Chautauqua Institution, a haven in the west of the state where writers and artists gather each summer, was not the kind of place where people worried about their safety. Members of the audience said there were no bag checks, metal detectors or other security to enter the event in the gated community.

Yet just before 11 a.m., as Rushdie prepared to lead a discussion about artistic freedom, hundreds of attendees watched in horror as a 24-year-old New Jersey man rushed to the stage and stabbed Rushdie in the neck and torso. Police said there was no immediate indication of a motive for the attack that left Rushdie severely injured and on a ventilator after surgery.

Rushdie, a defiant critic of religion and of leaders who use religion for political gains, had often bristled at security, despite knowing he was at risk of attacks from fundamentalists and passionate supporters of those politicians.

He spent years in hiding after Iran's Ayatollah Ruhollah Khomeini in 1989 issued a fatwa, or religious edict, calling on Muslims to kill him following the publication of his novel, "The Satanic Verses," which some Muslims said contained blasphemous passages.

In a memoir about his time in hiding, Rushdie expressed discomfort at the high levels of security at US airports in New Jersey and Denver when he arrived to speak. But in recent years, he had lived more freely and insisted he should not be constantly surveilled and protected by security guards.

Clarisse Rosaz Shariyf, senior director of literary programs at the writers organization PEN America, where Rushdie previously served as president, said that in four years of working closely with the author to put on festivals and other events, he never once requested a security detail.

Michael Hill, Chautauqua Institution's president, told reporters on Friday that security was a top priority for the community that brings together thousands of people for its nine weeks of summer programming.

He said such an attack was unprecedented at the institute, which was founded in 1874 and is dedicated to fostering civil dialogue on religious, social and political issues.

"Chautauqua has always been an extremely safe place," he said.

New York Governor Kathy Hochul told reporters Chautauqua was a "tranquil" community where the most preeminent speakers, thought leaders, politicians, justices and others came together to have free expression of thought.

Algerian writer and human rights activist Anouar Rahmani, who was slated to speak after Rushdie on Friday, said he only had to show his entry pass to get into the event and saw no additional security screenings.

"I think we should have had more protection around him," said Rahmani, who faced threats of his own after he publicly demanded that same-sex marriage be legalized in Algeria.

Bradley Fisher, 68, a retired advertising writer who was in the audience and witnessed the attack, said security was the same as in previous years.

Attendees purchased a pass to enter through the main gates and then had their passes scanned to get into the amphitheater, with no bag checks or metal detectors along the way.

Fisher said safety, diversity and differences of opinion had long been part of the fabric of the Chautauqua community.

"Not only was he (Rushdie) a victim, but I think that open community is going to be a victim as well," Fisher said.