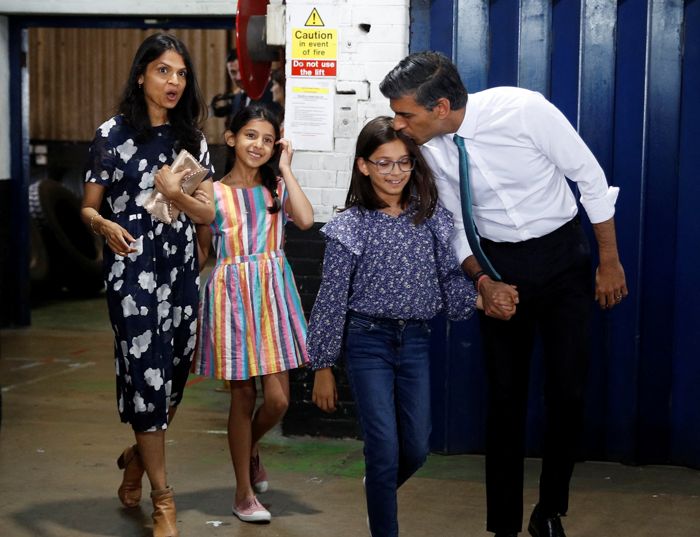 Rishi Sunak, his wife Akshata Murthy and their daughters at a Conservative Party leadership campaign event in Grantham. Reuters

Rishi Sunak has unleashed an intense campaign spree this weekend in his mission to win Conservative Party votes to be elected their leader and on Saturday pledged to put the UK on a “crisis footing” if elected Prime Minister.

The 42-year-old former Chancellor said in an interview that a business-as-usual approach would not work in the face of the serious economic challenges facing the country.

“Having been inside government, I think the system just isn’t working as well as it should. And the challenges that I’m talking about, they’re not abstract... they’re not things that are coming long down the track,” he said. “They’re challenges that are staring us in the face and a business-as-usual mentality isn’t going to cut it in dealing with them. So, from day one of being in office I’m going to put us on a crisis footing,” said Sunak.

Ahead of a speech in Grantham, the eastern England hometown of 1980s’ Prime Minister Margaret Thatcher — the former Tory leader both Sunak and opponent Liz Truss are pitching as their role model to woo traditional voters — the Southampton-born Indian-origin former banker-turned-politician highlighted how his deeply Conservative values were shaped by his family’s pharmacy business.