The stables are emptied, and the facility must be decontaminated and disinfected 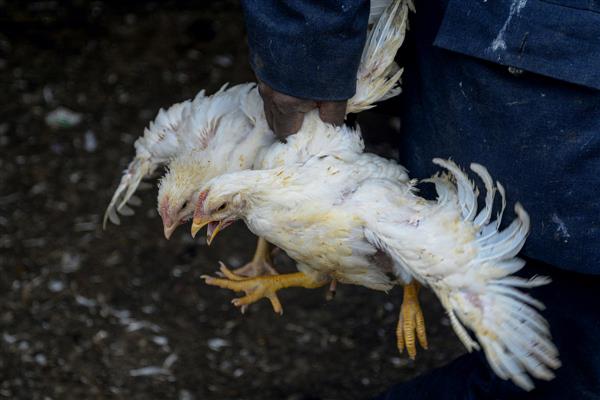 A large flock of chickens has been affected and the infection has spread further in the facility. PTI photo.

Some 1.3 million chickens will be culled in Sweden's Kalmar county after a bird flu outbreak was reported at a poultry farm, according to a local media report.

According to the report on Monday, an extensive spread of the highly pathogenic avian influenza virus H5N8 and H5N5 was found at the farm located in Monsteras municipality, reports Xinhua news agency.

A large flock of chickens has been affected and the infection has spread further in the facility, which now leads to 1.3 million poultry having to be killed and destroyed.

"The stables are emptied, and the facility must be decontaminated and disinfected," the report said.

To carry out the work, the Swedish Board of Agriculture and the National Veterinary Institute (SVA) asked the Swedish Armed Forces for help.

According to the SVA, the virus can survive for months under optimal conditions, which makes decontamination and disinfection important.

It is unclear, though, how the country's supply of eggs will be affected.

Since November 2020, Sweden has had five confirmed cases of bird flu in domestic poultry herds.

In addition to Kalmar county, the neighbouring Skane county has also been hit hard by an outbreak on four farms, where 1.4 million chickens have been culled.

"This year's virus variants are closely related to each other," Maria Noremark, a top official at the SVA, told the Swedish TT news agency.

"They are highly contagious and also cause very high mortality among domestic poultry." Restricted areas remain around the affected farms, according to the report.

Within the areas around the affected facilities in southern Sweden, Level 3 protection rules apply, under which domestic birds must be kept indoors to prevent contact with wild birds.

How the virus got into the country is unclear and the spread of the infection is ongoing, the report added.