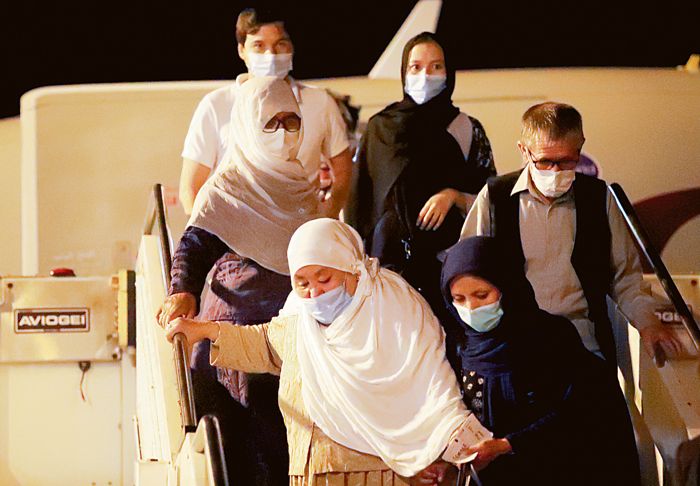 Evacuees arrive at the Tirana airport in Albania on Saturday. REUTERS

Taliban forces sealed off Kabul’s airport on Saturday to most Afghans hoping for evacuation as most NATO nations flew out their troops after two decades in Afghanistan, winding down a frantic airlift that Western leaders acknowledged was still leaving many of their citizens and local allies behind.

The US, which says the round-the-clock flights have evacuated more than 100,000 people since the Taliban claimed Kabul on August 15, was keeping up airlifts ahead of President Joe Biden’s Tuesday deadline for withdrawal. Britain also was carrying out its final evacuation flights though Prime Minister Boris Johnson promised to “shift heaven and earth” to get more of those at risk from the Taliban to Britain by other means.

Britain’s Ambassador to Afghanistan Laurie Bristo, said in a video from the Kabul airport and posted on Twitter that it was “time to close this phase of the operation now. But we haven’t forgotten the people who still need to leave. We’ll continue to do everything we can to help them. Nor have we forgotten the brave, decent people of Afghanistan. They deserve to live in peace and security.”

The Taliban were holding some positions within the airport, ready to peacefully take control as American forces fly out, spokesman Zabihullah Mujahid said. Outside the airport, Taliban leaders deployed extra forces to prevent large crowds from gathering. New layers of checkpoints sprang up on roads leading to the airport, some manned by uniformed Taliban fighters with Humvees and night-vision goggles captured from Afghan security forces. Areas where large crowds had gathered over the past two weeks in the hope of fleeing the country were largely empty.

An Afghan, who worked as a translator for the US military, said he was with a group of people with permission to leave. After passing through three checkpoints they were stopped at a fourth. An argument ensued, and the Taliban said they had been told by the Americans to only let US passport-holders through.

“I am so hopeless for my future,” the man said after returning to Kabul. “If the evacuation is over, what will happen to us?” — AP