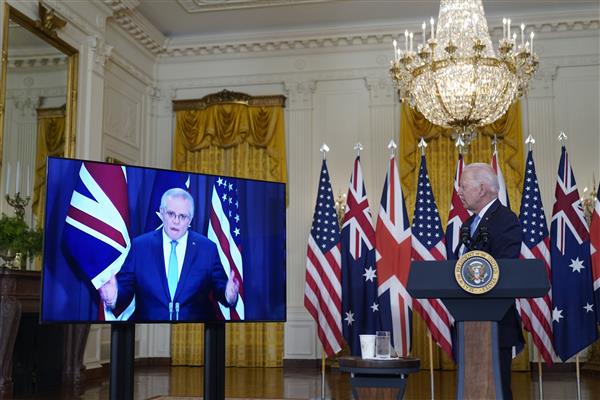 President Joe Biden, listens as he is joined virtually by Australian Prime Minister Scott Morrison and British Prime Minister Boris Johnson, not seen, as he speaks about a national security initiative from the East Room of the White House in Washington on September 15, 2021. AP/PTI

US President Joe Biden’s just your average Joe, it would seem. And he did what all average Joes do—he forgot someone’s name. Only that “someone” isn’t your regular John Smith—he’s the Australian Prime Minister Scott Morrison.

Biden was addressing a press conference on security ties with British Prime Minister Boris Johnson and Australia’s Morrison. And when he came to Morrison, he seemed to have blanked out on his name.

"Thank you, Boris and... and I want to thank… that fellow Down Under,” Biden said, turning to Morrison. Morrison shot back quickly: “Thank you very much, pal".

Media commentators were quick to point out the blunder, and soon, the hashtag #ThatFellaDownUnder became a top trend. Some Australians bristled, but most saw an opportunity to take a swipe at Morrison, whose popularity seems to have plummeted since the Covid lockdowns.

Surely “That fella Down Under” is the equivalent of running into someone in the pub whose name you can’t remember and can only come up with “Maate”.

shouldn't it be a rule that you're not allowed to buy nuclear subs unless you CAN PRONOUNCE NUCLEAR?!#ThatFellaDownUnder #Scottythefukwit pic.twitter.com/egjW205NGg