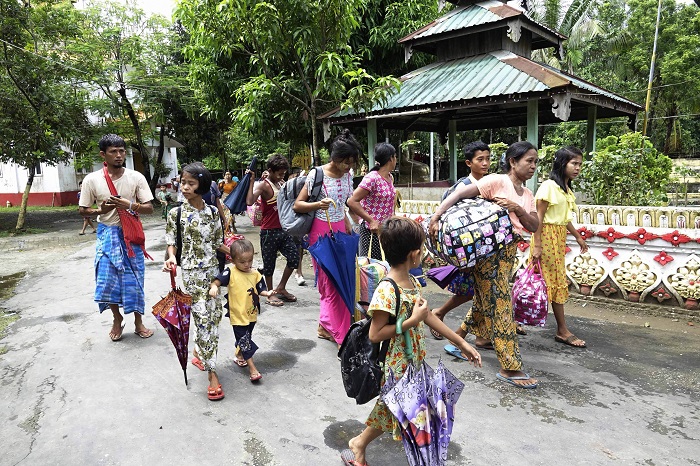 Thousands of people in an area of western Myanmar where there have been clashes between the government and ethnic rebels have been fleeing from their villages over the past week after an evacuation order from officials.

The Rakhine state government in an order last Tuesday instructed village administrators in Rathedaung township to tell residents to stay away from their homes due to military plans to conduct a "clearance operation" against the rebel.

The exodus from more than 40 villages is continuing almost a week later, even though the order was revoked last Friday by Rakhine state's security and border affairs minister.

"Since the day the order was issued, more than 10,000 people from the operation area fled their villages," Khin Maung Latt, an upper house member of parliament for Rathedaung township, said on Monday.

The government has been embroiled for more than a year in an intermittent conflict with the Arakan Army, a well-trained and well-armed guerrilla force representing members of the area's Rakhine ethnic group.

The guerrilla force is posing the strongest military challenge to the central government of the many ethnic minority groups who for decades have sought greater autonomy.

Human rights advocates have accused Myanmar's army of using undue force and targeting civilians in their operations fighting the guerrillas.

In Rakhine in 2017, the military carried out counterinsurgency operations against insurgents from the Muslim Rohingya minority, but critics charge they employed a campaign of terror to drive the Rohingya out of the country.

An estimated 740,000 Rohingya fled to neighboring Bangladesh, where they remain in refugee camps.

The Rakhine are Buddhist, the religion of almost 90% of Myanmar's people.

During the past week's exodus, some people fled to villages out of the designated area, and others to Sittwe, the capital of Rakhine.

"We have to flee the village as we don't want to face the soldiers from the military. They were shooting into the village, arresting the villagers to use as human shields," said Aye Mg, a 58-year-old resident of Rathedaung township's Kyauktan village, where the government previously detained dozens of suspected Rakhine militants.

"People can't live in their places any longer due to the fighting. We are hosting over 300 displaced people at our monastery; around 100 of them have arrived recently," Okkahta, a monk, said from the Tahtipati Sipintharyar Monastery in Rathedaung town.

"It's like doomsday for them," lawmaker Khin Maung Lat said, explaining why villagers fled. "They are in fear. This is the impact of the evacuation order to stay away from the village during the military operation."

"Even most of the village administrators are fleeing from the villages," he said. "Even they are scared to go back to their villages." — AP