President Tsai Ing-wen had announced that the government would allow imports of the US pork containing ractopamine, an additive banned in the EU and China 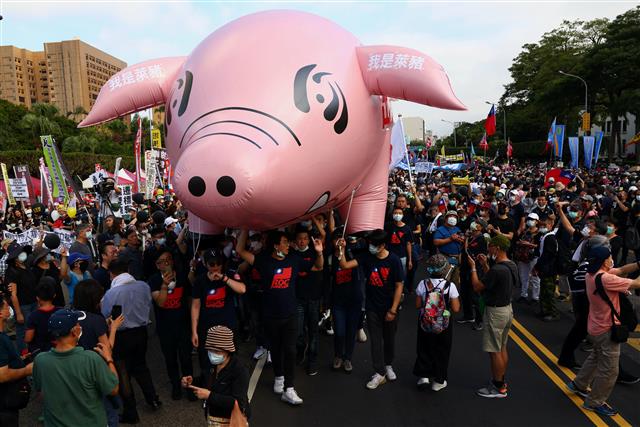 People join a protest to oppose the import of US pork containing ractopamine, an additive that enhances leanness, in Taipei, Taiwan, on November 22, 2020. REUTERS

Thousands of people took to Taipei’s streets on Sunday for the annual “Autumn Struggle” protest march organised by labour groups, with much of the anger focused on the government’s decision to ease restrictions on imports of the US pork.

Taiwan’s main opposition party, the Kuomintang (KMT), rallied its supporters to join the march for the first time, having mounted an increasingly strident campaign against the pork decision, which it says threatens food safety.

President Tsai Ing-wen announced in August that the government would, from January 1, allow imports of the US pork containing ractopamine, an additive that enhances leanness but is banned in the European Union and China, as well as US beef more than 30 months old.

While welcomed in Washington, and removing a roadblock to a long sought-after US free trade deal for Taiwan, the KMT has strongly opposed the decision, tapping into public concern about food safety after several high-profile scandals in recent years.

KMT Chairman Johnny Chiang, elected in March to help turn around party fortunes after a trouncing in January’s presidential and parliamentary elections, called on Tsai to take part in a televised debate on the issue.

“Taiwanese pigs don’t eat ractopamine and yet you are asking Taiwanese people to? Does this make sense?” he told supporters.

Tsai’s government and her ruling Democratic Progressive Party (DPP), which has a large majority in Parliament, says the decision brings the island into line with international norms, is not a safety threat and will boost Taiwan-US ties.

In a statement on Sunday, the DPP urged the KMT to “stop its political machinations and return to rational discussions”.

The DPP, which had previously voiced strong objections to ractopamine, has accused the KMT of spreading fake news about the subject in an effort to sow public fear.

The KMT is also trying to organise a referendum on the US pork imports. Reuters