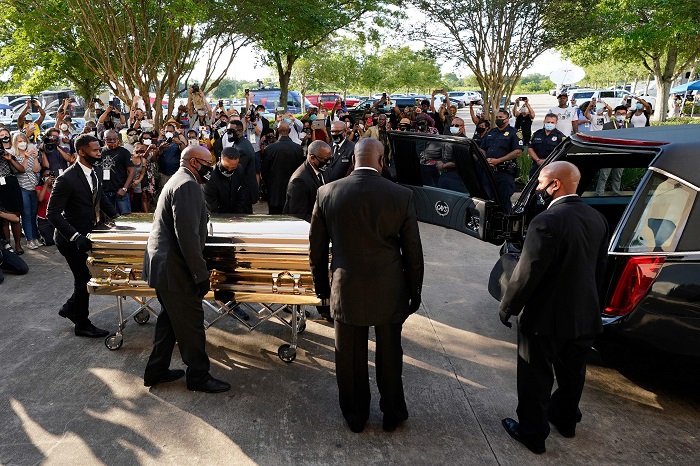 Pallbearers load the casket of George Floyd into a hearse after a public viewing at the Fountain of Praise church in Houston. AFP

Thousands of mourners from across the US lined up outside a Church here to offer their condolences to African-American George Floyd, as his death two weeks ago continues to stoke protests in America and beyond over racial injustice, and spurred France to abruptly halt the use of police choke holds.

The 46-year-old victim, a native of Houston, was handcuffed and pinned to the ground by the white police officer who kneeled on his neck as he gasped for breath.

Floyd's death triggered nationwide violent protests with a section of the protesters resorting to looting and rioting across the country, leaving behind a trail of destruction.

His body arrived in Houston late on Saturday for funeral service and burial scheduled for Tuesday.

The six-hour long public viewing for Floyd, which got underway at noon till 6 pm attracted over 5,000 mourners in the record heat, wearing masks and gloves.

The mourners lined up to usher in to walk toward Floyd's golden casket for a brief moment to pay their respects.

Floyd's funeral is scheduled for Tuesday, followed by burial at the Houston Memorial Gardens cemetery in Pearland, where he will be laid to rest next to his mother, Larcenia Floyd.

Floyd was raised in Houston's Third Ward and was a well-known former high school football player who rapped with local legend DJ Screw.

He moved to Minneapolis several years ago to seek work and a fresh start.

His face now appears on a mural in his old neighbourhood and his name was chanted by tens of thousands last week at a protest and march in downtown Houston.

Texas Governor Greg Abbott (R) met with George Floyd's family on Monday when he travelled to Houston for Floyd's viewing.

The governor said he was meeting with Floyd's family privately to express his condolences and give them a flag flown over the Texas Capitol in Floyd's honour. Abbott also signalled that he would back police reforms after Floyd died in Minneapolis police custody last month.

"Today is a sad day. Ever since his death has been a sad day," Abbott told reporters at the church.

"His life will be a living legacy about the way that America and Texas responds to this tragedy. I'm here to tell you today that I am committed to working with the family of George Floyd to ensure we never have anything like this ever occur in the state of Texas," he said.

Apart from the Texas Governor, presumptive Democratic nominee Joe Biden also dined with his family on Monday at Houston's one of the black-owned restaurants.

"He listened, heard their pain, and shared in their woe. That compassion meant the world to this grieving family," Ben Crump, Floyd's lawyer tweeted.

In a tweet posted by Harris County, Judge Lina Hidalgo, on Monday, said she has issued a proclamation that will be announced on Tuesday. — PTI