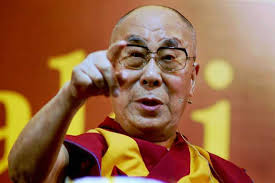 Tibetans are hopeful of being united with the United States once again with their globetrotting spiritual leader, the Dalai Lama, who has a special relationship with US presidents that began with a gold watch, calling on President Joe Biden soon for substantive discussions.

After a four-year unusual exception of President Donald Trump, they feel Biden will continue a decades-old practice of the deep and enduring affinity between the Americans and the Tibetans, that has been followed religiously by American presidents by extending an invitation to the Buddhist monk in the Oval Office, generally reserved for visiting heads of state, as the pandemic subsides.

A representative of the spiritual leader told IANS that since George HW Bush (1991), the Dalai Lama has met all US presidents, including Barack Obama on four occasions.

Every time, the meetings have prompted a sharp reaction from the Chinese government, which views the Nobel Peace laureate as a hostile element bent upon splitting Tibet from China.

In 2007, the Dalai Lama received the US Congressional Gold Medal, even in the face of protests by China.

The last official meeting was when Obama greeted the Dalai Lama in 2016 at the White House.

At the last meeting, they reportedly discussed “the situation for Tibetans in the People’s Republic of China, and the then president had emphasised his strong support for the preservation of Tibet’s unique religious, cultural and linguistic traditions, and the equal protection of human rights of Tibetans in China”.

“Barack Obama encouraged meaningful and direct dialogue between the Dalai Lama and his representatives with Chinese authorities to lower tensions and resolve differences,” the White House had said after the meeting.

The first meeting of the two old trusted friends — the Dalai Lama and Obama — was in 2005 when the latter was a member of the Senate. In 2017, Obama met the spiritual leader in New Delhi, sixth in the series, to discuss promoting peace in the world.

The Dalai Lama-George W Bush proximity came to the fore when the leader-in-exile in an interview in 2012 with Piers Morgan, then with CNN, said: “I love President Bush.”

“As a human being. Not as a president of America. Sometimes his policy may not be very, very successful but as a person, as a human being, very nice person. I love him.”

The 85-year-old monk, who was enthroned two years before President Biden was born, has lived in exile in India since fleeing Tibet during a failed uprising against the Chinese government in 1959.

On his first day in office, President Biden signed an executive order for the US return to the Paris climate accord, which earned accolades, including one from the Dalai Lama.

Former US president Franklin Roosevelt also had sent the Dalai Lama a pocket-watch as a gift when he was a young boy. The Dalai Lama, who visits only on invitation, described the gold watch as magnificent and even took it with him when he fled Tibet in 1959.

In his election campaign, Biden had said if voted to power, his administration would sanction Chinese officials responsible for human rights abuses in Tibet, besides meeting with His Holiness the Dalai Lama.

“The invitation to His Holiness from the White House would provide an opportunity to discuss the situation in Tibet and to advance US support for the ‘middle-way approach’,” a representative from the spiritual leader’s office told IANS.

The ‘middle-way approach’ demands ‘greater autonomy’ for the people in Tibet.

Echoing similar sentiments, activist and poet Tenzin Tsundue, who twice “breached the wall” by unfurling protest banners during the visits of Chinese premiers to India, said: “Tibet emerged as one of the contesting issues during the US election campaigns.”

“President Joe Biden promised to meet His Holiness the Dalai Lama. The Tibet support resolution — Tibetan Policy and Support Act (TPSA), 2020 — was also passed by bipartisan support to show that Tibet is an important issue in dealing with China.”

“As Tibetans, we must make sure we secure our interest from among American tussle with China. The US has benefitted tremendously from its One-China policy, which supports China’s 70 years of occupation of Tibet and China’s trade compared to any instances of Tibet support efforts,” Tsundue told IANS.

In a congratulatory letter to Biden on becoming the 46th President, the Dalai Lama wrote: “The whole world places its hope in the democratic vision and leadership of the United States…Once again I take this opportunity to express our gratitude for your long-standing support for the Tibetan people. It has been our good fortune to have enjoyed the friendship and encouragement of the American people and their leaders in our endeavour to protect and preserve our ancient Buddhist culture, a culture of peace, non-violence and compassion.”

In her speech at the Congressional Gold Medal award-giving ceremony by President George W Bush at the Capitol Hill in Washington on October 17, 2007, Speaker Nancy Pelosi said she would always be grateful to Chairman Tom Lantos for affording many Members of Congress their first meeting with His Holiness in 1987.

The 14th Dalai Lama was born on July 6, 1935, in a small village in the remote Amdo region of Tibet. IANS