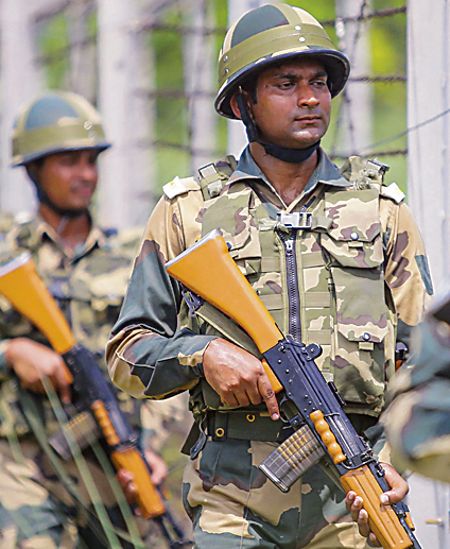 The US provided information, cold-weather clothing and other equipment to India during its recent border crisis with China, which has adopted an increasingly assertive military posture to exert pressure and expand its influence across the region, a top Pentagon commander has informed US lawmakers. File photo

The US provided information, cold-weather clothing and other equipment to India during its recent border crisis with China, which has adopted an increasingly assertive military posture to exert pressure and expand its influence across the region, a top Pentagon commander has informed US lawmakers.

Admiral Philips Davidson, Commander of the US Indo-Pacific Command, also informed the powerful Senate Armed Services Committee on Tuesday that China’s recent activities along the Line of Actual Control (LAC) have opened India’s eyes to what cooperative effort with others might mean for their own defensive needs as he observed that New Delhi, in the very near term, would deepen its Quad engagement. “We have been deepening our maritime cooperation,” he said.

China moved over 60,000 well-armed troops who were mobilised for annual exercises, to contentious areas like Pangong Lake in the eastern Ladakh in May last year, prompting India to match the PLA’s mobilisation which led to an over eight-month long standoff.

After lengthy rounds of talks, the two sides simultaneously withdrew troops from Pangong Lake area last month while talks are on for the withdrawal of soldiers from the rest of the areas along the LAC in eastern Ladakh.

The maiden Quad leaders’ summit involving leaders of Australia, India, Japan and the US will be held on Friday. US President Joe Biden and Prime Minister Narendra Modi will attend the first summit in a virtual format along with Australia PM Scott Morrison and Japan PM Yoshihide Suga.

During the summit, the Quad leaders will discuss regional and global issues of shared interest, and exchange views on practical areas of cooperation towards maintaining a free, open and inclusive Indo-Pacific region. — PTI

Beijing: A wary China on Wednesday hoped that India, US, Japan and Australia will do things in the Quad summit that are “conducive” to regional peace and stability instead of the “opposite”. Chinese Foreign Ministry spokesman Zhao Lijian said China believes that any regional cooperation architecture should follow the principle of peaceful development. PTI