Donald Trump is the only President ever to be impeached twice 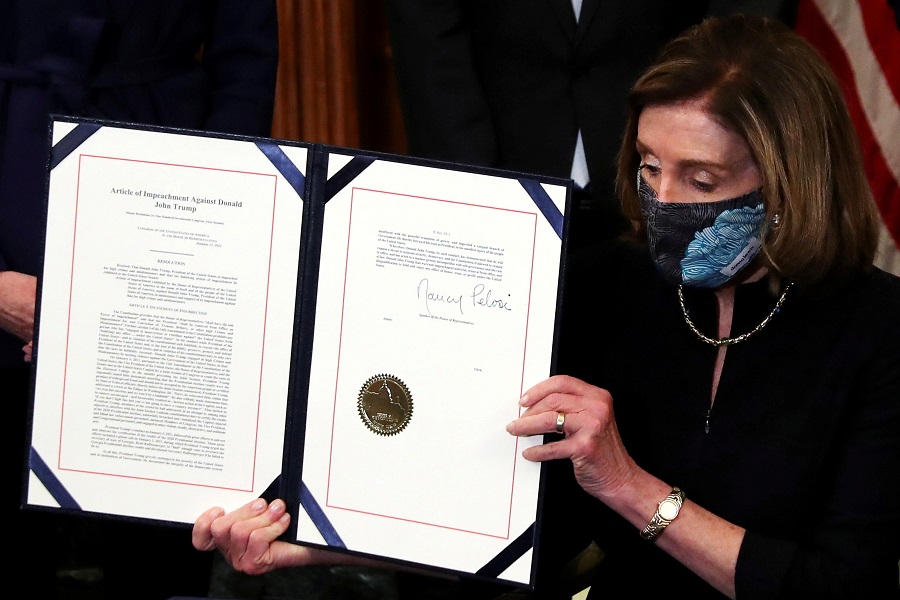 US House Speaker Nancy Pelosi (D-CA) shows the article of impeachment against President Donald Trump after signing it in an engrossment ceremony, at the US Capitol in Washington. Reuters

President Donald Trump's impeachment trial could begin at 1 pm (local time) on Inauguration Day next Wednesday as President-elect Joe Biden is being sworn into office.

That's according to a timeline of Senate procedure obtained by The Associated Press.

It's the possible schedule if House Speaker Nancy Pelosi sends the articles of impeachment to the Senate soon.

Trump was impeached by the House on Wednesday on a single charge of incitement to insurrection after the deadly Capitol siege last week by a pro-Trump mob.

Also read: US House impeaches Donald Trump for ‘incitement of insurrection’ at Capitol

Trump is the only President ever to be impeached twice.

Pelosi, D-Calif., hasn't said when she'll send the impeachment charge to the Senate.

Some Democrats have suggested holding back to allow Biden time to be inaugurated and to start working on his priorities first.

Biden has suggested the Senate could divide its time between the impeachment trial and confirming his Cabinet nominees and working on COVID-19 relief and other issues. AP