Two dead in anti-govt protests in Syria : The Tribune India 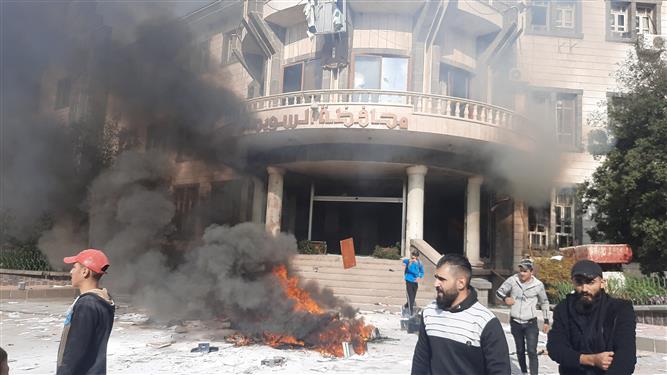 Smoke rises near a building after an anti-government protest turned violent in Sweida, Syria, on Sunday. Reuters

Protests in Syria’s Druze-majority Sweida province turned violent on Sunday leading to the deaths of a protester and a police official, and wounding seven others.

Dozens of residents gathered by the Sweida governorate building, decrying the dire economic situation and chanting anti-government slogans before some broke into the building.

The Syrian Interior Minister in a statement said that the people who raided the building were armed, and destroyed furniture, smashed windows, and looted files. The statement added that a police officer was killed after protesters attacked a police station.

“There is a large deployment of security forces in the area, and you can still hear gunshots,” Rayan Maalouf, who heads the Suwayda 24 collective told the media.

Nashaat al-Atrash, a Druze legislator in Syria’s Parliament condemned protesters for raiding the governorate building and called for calm. “All of Syria is going through an economic crisis,” he told the media, claiming that outside forces could be trying to stoke tensions through the angry demonstrations.

Anti-government demonstrations are rare in Syria where President Bashar Assad stamped out a pro-democracy uprising over a decade ago. Assad survived the resulting civil war but the conflict has plunged Syria into poverty, coupled with a food security and energy crisis recently.

Though Sweida has generally been spared from the civil war, anti-corruption protests have occurred in the Druze-majority province over the past few years, with tensions simmering between residents and the Syrian government led by President Assad.

After an Islamic State militant group attack on Sweida in 2018, more residents took arms to protect their neighborhoods. Local activists have reported clashes last summer between armed residents and armed groups aligned with the Syrian government and security agencies. — AP