Places of worship will reopen for prayer and services, including weddings with a maximum of 30 people 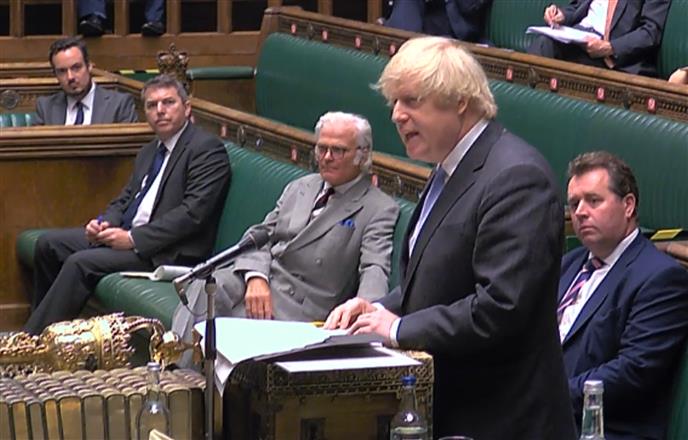 A video grab from footage broadcast by the UK Parliaments Parliamentary Recording Unit (PRU) shows Britains Prime Minister Boris Johnson giving a statement in the House of Commons in London on the easing of coronavirus restrictions June 23, 2020. AFP

UK Prime Minister Boris Johnson on Tuesday announced July 4 as the date for a significant lifting of lockdown restrictions in the country, with cinemas, museums, bars, pubs and restaurants being allowed to open their doors to the public once again.

The venues, which have been closed for at least three months since the UK went into its official COVID-induced lockdown on March 23, will be required to have safety measures set out under government guidance in place to be able to operate.

“The government will publish COVID-secure guidelines for each sector that is reopening as businesses get back on their feet and people get back to work,” he said.

“But the virus has not gone away… there will be flare-ups, for which local measures will be required. We will not hesitate to apply the brakes and reimpose restrictions even at a national level,” he said in his statement.

The Cabinet met earlier on Tuesday to officially rubber-stamp the decision to allow public venues, including theatres and businesses such as hairdressers, to reopen and effectively mark an end to the lockdown on what some British MPs have dubbed as July 4 “Super Saturday”.

The UK PM also confirmed that the current mandatory 2-metre social-distancing rule would be halved to 1 metre (3ft 3in) from July 4, with some mitigating measures.

The government had come under pressure from the hospitality sector, and some MPs from within the ruling Conservative Party, to relax the 2-m rule, with many saying it would be impossible to trade under the current measures.

“People will be advised to keep one metre-plus in places where two-metres are not possible,” Johnson said, reiterating that guidance such as avoiding face-to-face seating, using protective screens and providing hand sanitiser will be issued to all public venues.

Making a specific reference to hairdressers, Johnson said he along with the rest of the country have been waiting for a haircut which would now be possible with the use of safety measures such as face visors.

Stressing on the unchanged safety advice, the UK Prime Minister said there was “only one certainty – the fewer social contacts you have, the safer you will be”. The government’s duty is to “guide the British people” while recognising the “natural desire” to return to normality.

“Our principle is to trust the British public to use their common sense, remembering the more we open up the more vigilant we will need to be,” he said.

From July 4, two households will be able to meet in any setting – indoors or out – but multiple households will still be required not to meet indoors to avert the risk of creating greater “chains of transmission”.

Places of worship will reopen for prayer and services, including weddings with a maximum of 30 people, all subject to social distancing. Courts and other public services will increasingly resume face to face proceedings from July 4.

However, certain venues including nightclubs, indoor gyms, swimming pools and spas will remain closed for now, as will bowling alleys and water parks. But Johnson said that task forces are being established to help them become COVID-secure to reopen as soon as possible.

“We do want more clarity but we welcome the thrust of this statement,” he said.

The devolved administrations of Scotland, Wales and Northern Ireland will set out their own lockdown easing plans, though the government is pushing for a UK-wide approach.

On Monday, the UK saw its lowest daily death toll from the deadly virus at 15 deaths to hit a total figure of 42,647, prompting UK Health Secretary Matt Hancock to declare that the virus was “in retreat” in the country.

The minister also said that from July 6, the people in the vulnerable health category, who had been shielding behind closed doors, would be able to spend time outdoors in a group of up to six people, including those outside of their household, while maintaining social distancing.

“Now, with infection rates continuing to fall in our communities, our medical experts have advised that we can now ease some of these measures, while keeping people safe,” said Hancock.

From August 1, the guidance will then be relaxed so clinically extremely vulnerable people will no longer be advised to shield, but support will remain available from National Health Service (NHS) volunteers and local councils. PTI