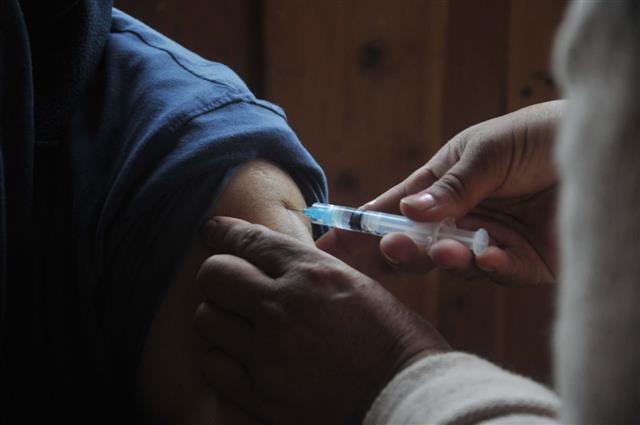 The UK's health officials on Friday opened up the country's Covid vaccination programme to all adults, in what has been dubbed as the “final push” to offer protection against the deadly virus.

The National Health Service (NHS) said everyone aged 18 and over is being urged to arrange a jab if they have not had one as it begins sending around 1.5 million texts to people aged 18-20.

It said the latest “milestone” in the NHS Covid Vaccination Programme comes fewer than 200 days since the health service made history by delivering the first Covid vaccine outside of a clinical trial on December 8, 2020.

“Offering all adults a jab less than 200 days after the programme launched is one of our country's greatest collective achievements, saving over 14,000 lives so far,” said UK Prime Minister Boris Johnson.

“I cannot thank NHS staff, the Army, volunteers, manufacturers and all those involved in this extraordinary national effort enough. Today sees vaccines accelerate in their race with the virus – so now let's finish the job. If you haven't yet, come forward and get your jab,” he said.

According to latest figures, around eight in 10 adults have had their first dose while more than half have had their second dose, seen as vital in the fight against the highly transmissible Delta variant of Covid first identified in India.

“This is a momentous occasion in our national mission. In just over six months the NHS has administered more than 72 million vaccines across the UK at lightning speed and reached 4 in 5 adults. Now we are offering a jab to every single person over the age of 18 in England,” said UK Health Secretary Matt Hancock.

“We started with the most vulnerable to Covid and, so far, we have saved more than 14,000 lives and prevented 42,000 hospitalisations in England alone. In our race between the vaccine and the virus, we're approaching the final stretch and we are doing all we can to vaccinate people as quickly as possible with first and second doses,” he said.

All parts of the United Kingdom are following similar age-based cohorts, with Scotland, Wales and Northern Ireland also on track to offer vaccinations to all adults. The NHS said it braced for high demand after the first group of people in their 20s to be offered vaccines booked more than 1 million appointments in a single day last week.

“This is truly a watershed moment… Only months after delivering the world-first first jab hard working NHS staff have given more than 60 million vaccinations in England alone, saving thousands of lives and giving the entire country hope for a brighter future,” said NHS England chief executive Sir Simon Stevens.

“Extensive planning and the tireless hard work of staff and volunteers have made the NHS vaccine programme an historic success. Now we are delivering a final push to protect the country so when your time comes, or if you haven't done so already, please play your part and come forward to make your first appointment or get your second dose,” he said.

NHS England lead for the Covid Vaccination Programme, Dr Emily Lawson, added: “We're in the final weeks of this historic drive to get everyone aged 18 and over their first Covid-19 vaccine, having already vaccinated more than three quarters of the population in only six months, and ensured that over half the country has had their second jab too.

“We know that getting both doses is vital to maximising the positive impact of the vaccines.”

People are able to book a jab at a Vaccination Centres, pharmacy or general practice sites across the country, through a centralised national booking service. Vaccination centres are also available in convenient locations such as temples, mosques, museums and rugby grounds.

Currently, the UK is administering Oxford/AstraZeneca, Pfizer/BioNTech and Moderna vaccines to protect against Covid.

People aged 39 and under and pregnant women are being offered the Pfizer or Moderna vaccines in line with updated guidance from the Joint Committee on Vaccination and Immunisation (JCVI), following reports of some extremely rare blood clotting linked with the Oxford/AstraZeneca vaccine in younger age groups. PTI