'Lay down your arms' before dawn, Russian general says; hundreds of thousands of civilian trapped under siege 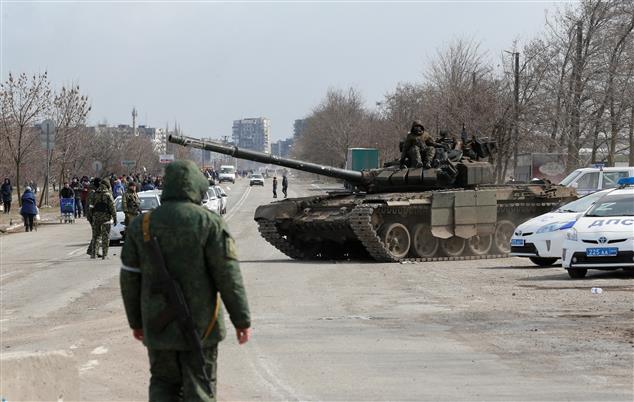 Service members of pro-Russian troops are seen atop a tank during Ukraine-Russia conflict on the outskirts of the besieged southern port city of Mariupol. Reuters

Ukraine defied a Russian demand that its forces lay down arms before dawn on Monday in Mariupol, where hundreds of thousands of civilians have been trapped in a city under siege and already laid to waste by Russian bombardment.

Russia's military had ordered Ukrainians inside the besieged southeastern city to surrender by 5 a.m., saying that those who do so would be permitted to leave through safe corridors.

"There can be no question of any surrender, laying down of arms" in the city, Ukrainian Deputy Prime Minister Iryna Vereshchuk responded. "We have already informed the Russian side about this."

Russia's assault on Ukraine, now in its fourth week, has stalled along most fronts. Russia has failed to seize a single major Ukrainian city much less capture the capital Kyiv or swiftly topple the government of President Volodymyr Zelenskiy.

But Russia has pounded residential areas, causing massive destruction. Nowhere has suffered worse than Mariupol, a port on the Azov Sea, home to 400,000 people before the war. It has been under siege and constant bombardment, with no food, medicine, power or fresh water, since the invasion's early days.

Some people have been allowed out in private cars, but Russian forces have not permitted aid convoys or buses to evacuate civilians to reach the city. Ukraine also accuses Moscow of deporting some civilians from Mariupol to Russia.

"Lay down your arms," Colonel-General Mikhail Mizintsev, director of the Russian National Center for Defence Management, said in a briefing distributed by the defence ministry, announcing the ultimatum. "All who lay down their arms are guaranteed safe passage out of Mariupol." Mizintsev accused "Nazis" in Mariupol of causing a "terrible humanitarian catastrophe" there, including shooting people trying to leave. He presented no evidence for this.

"What I saw, I hope no one will ever see," said Greece's consul general in Mariupol, Manolis Androulakis, who arrived home on Sunday after a four-day journey since escaping the siege, the last European diplomat to leave the city.

"Mariupol will become part of a list of cities that were completely destroyed by war; I don’t need to name them: they are Guernica, Coventry, Aleppo, Grozny, Leningrad." In an intelligence update on Monday, Britain's Ministry of Defence said Russia's assault on Kyiv was stalled. Heavy fighting was continuing near Hostomel, a suburb in an area to the northwest where Russia's advance has largely been halted since the war's first hours on Feb. 24.

"Forces advancing from the direction of Hostomel to the northwest have been repulsed by fierce Ukrainian resistance." Russia calls the war, the biggest attack on a European state since World War Two, a "special military operation" to disarm Ukraine and protect it from "Nazis". The West describes this as a false pretext for an unprovoked war of aggression to subdue a country President Vladimir Putin describes as illegitimate.

The U.N. human rights office said at least 902 civilians had been killed as of midnight Saturday, though the real toll was probably much higher. The U.N. refugee agency said 10 million Ukrainians have been displaced, including some 3.4 million who have fled to neighbouring countries such as Poland.

THE CITY WILL SURVIVE

While suburbs of Kyiv in the path of Russia's advance have been reduced to rubble, defenders have managed to prevent the capital from coming under a full-scale assault. However, it has been subjected to deadly shelling and missile strikes nightly.

In the latest, authorities said at least eight people were killed by shelling that destroyed a shopping centre.

Apart from Mariupol, the eastern cities of Kharkiv, Sumy and Chernihiv have been hardest hit by Russia's tactic of flattening urban areas with artillery.

Kharkiv Mayor Igor Terekhov said in televised comments that hundreds of buildings, many of them residential, have been destroyed in the country's second largest city.

"The city is united... Kharkiv will survive," Terekhov said, describing hundreds of buildings destroyed. "It is impossible to say that the worst days are behind us, we are constantly being bombed, there was shelling again overnight." On the diplomatic front, European Union foreign and defence ministers meet on Monday to discuss imposing further sanctions on Moscow, especially whether to introduce an oil embargo.

The Kremlin has so far not been moved to change course in Ukraine by four rounds of EU sanctions imposed over the past three weeks, including on 685 Russians and Belarusians and on Russian finance and trade.