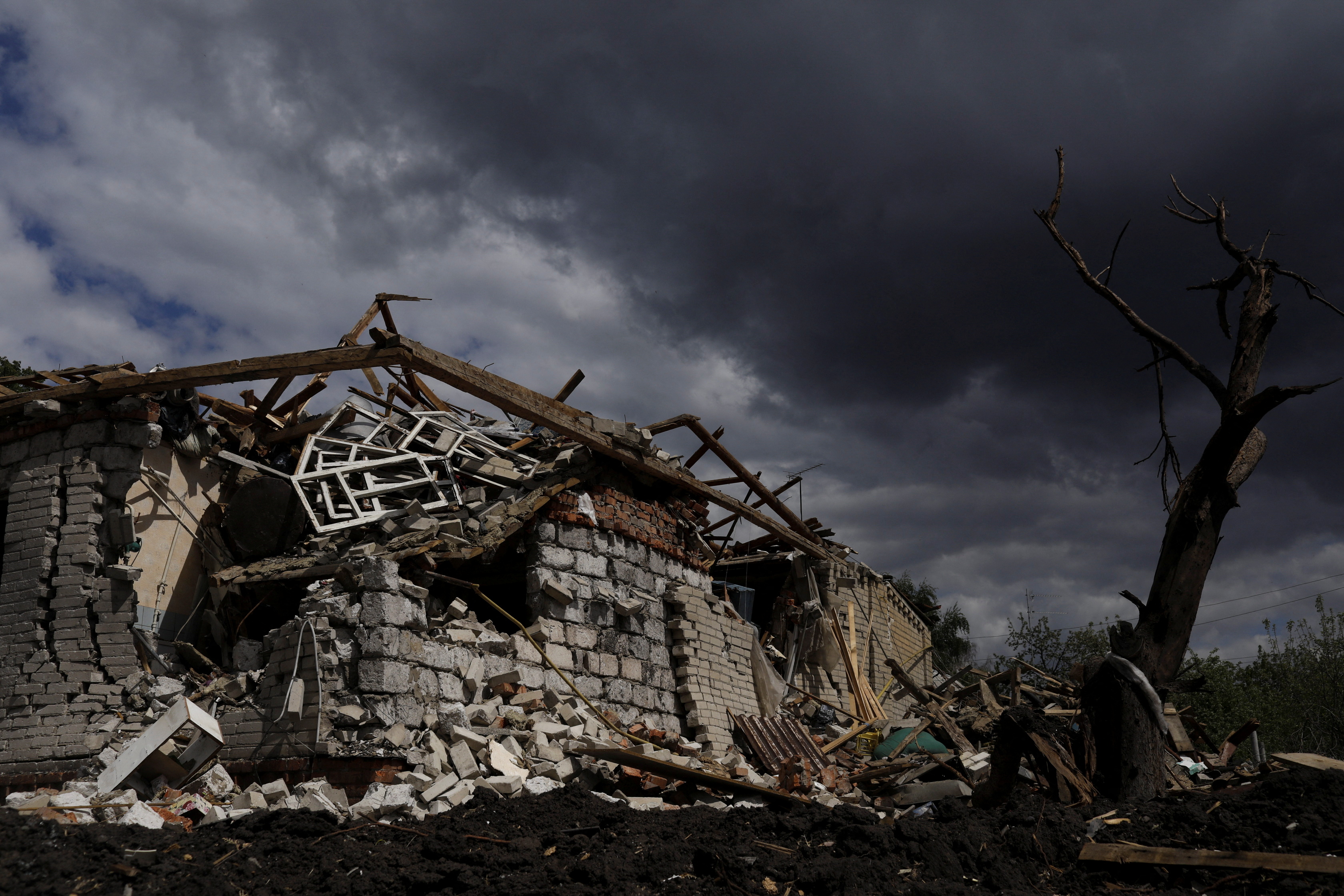 A destroyed house is pictured in Slatyne village, amid Russias attack on Ukraine. Reuters

President Volodymyr Zelenskiy said the assaults had turned the Donbas into “hell”.

Russian aircraft had also struck at targets, the general staff said in a statement.

“The Russian army has started very intensive destruction of the town of Sievierodonetsk, the intensity of shelling doubled, they are shelling residential quarters, destroying house by house,” Luhansk governor Serhiy Gaidai said via his Telegram channel.

“We do not know how many people died, because it is simply impossible to go through and look at every apartment,” he said.

Earlier reports had put the civilian death toll in the Luhansk area of the Donbas at 13 in the past day, with 12 of them in Sievierodonetsk, which lies on a river about 110 km (70 miles) northwest of the regional capital.

“The Donbas is completely destroyed,” President Zelenskiy said in an address on Thursday night. “It is hell there - and that is not an exaggeration.”

Reuters could not independently verify the reports and Russia denies targeting civilians.

In Moscow, Russian Defence Minister Sergei Shoigu said the “liberation of the Luhansk People’s Republic” would be completed soon.

The industrial region compromises the Donetsk and Luhansk areas, parts of which are controlled by Moscow-backed separatists.

“Groupings of the Russian Armed Forces, together with units of the people’s militia of the Lugansk (Luhansk) and Donetsk people’s republics, continue to expand control over the territories of the Donbas,” Shoigu said in a speech.

Russia’s focus on the Donbas follows its failure to capture the capital Kyiv in the early stages of the invasion launched by Russian President Vladimir Putin on Feb. 24.

In the weeks of warfare pitting Russia’s military might against dogged Ukrainian resistance, thousands of people have been killed and whole towns and cities shattered in the gravest crisis in Europe in decades.

Almost a third of Ukraine’s people have fled their homes, including more than 6 million who have left the country in a refugee exodus, while others remain trapped in cities pulverised by Russian bombardments.

British military intelligence said on Friday Russia is likely to further reinforce its operations in the Donbas once it finally secures the southern port city of Mariupol - scene of a weeks-long siege and Russia’s most significant success in a campaign of mixed fortunes for the Kremlin.

In a sign of Russia’s need to bolster its war effort, the parliament in Moscow said it would consider a bill to allow Russians over 40 and foreigners over 30 to sign up for the military.

Putin calls the invasion a “special military operation” to rid the country of fascists - an assertion Kyiv and its Western allies say is a baseless pretext for an unprovoked war.

The Kremlin leader was due to hold a security council meeting later on Friday.

Western powers, who have strongly condemned Russia’s actions and sought to isolate Moscow with an array of sanctions, were stepping up support for Ukraine.

The Group of Seven rich nations on Thursday agreed to provide Ukraine with $18.4 billion to make up for lost revenues as the war wrecks its economy.

The U.S. Senate approved nearly $40 billion in new aid for Ukraine, by far the largest U.S. aid package to date.

The White House is also working to put advanced anti-ship missiles in the hands of Ukrainian fighters to help defeat Russia’s naval blockade, which has largely stopped Ukraine’s exports of food.

U.S. Secretary of State Antony Blinken accused Russia of using food as a weapon by holding “hostage” supplies for not just Ukrainians, but also millions around the world.

The war has caused global prices for grains, cooking oils, fuel and fertiliser to soar.

The European Union said it is looking into ways of using the frozen assets of Russian oligarchs to fund the reconstruction of Ukraine, while the United States has not ruled out possibly placing sanctions on countries that purchase Russian oil.

The past week has seen Russia secure its biggest victory since the invasion began, with the Kyiv government ordering the defenders of a steelworks in Mariupol to stand down after a protracted siege.

British military intelligence said as many as 1,700 soldiers were likely to have surrendered at the Azovstal steel factory.

Russian Defence Minister Shoigu put the number of those laying down their arms at about 2,000.

Ukrainian officials, who have tried to arrange a prisoner swap, have declined to comment on the number, saying it could endanger rescue efforts.

Sviatoslav Palamar, deputy head of the Azov Regiment defending the steelworks, released an 18-second video on Thursday in which he said he and other commanders were still inside the plant.

“A certain operation is going on, the details of which I will not disclose,” he said.

The International Committee of the Red Cross said it had registered hundreds of prisoners from Azovstal now held by Russia, but it has not given a precise number.

The leader of Russian-backed separatists in control of the area said nearly half of the fighters remained inside the steelworks.

The wounded were given medical treatment while those who were fit were taken to a penal colony and were being treated well, he said. Reuters