Ukraine president Zelenskyy's wife pens open letter: 'If we don't stop Putin on nuclear war, then no safe place in world for any of us' : The Tribune India

Ukraine president Zelenskyy's wife pens open letter: 'If we don't stop Putin on nuclear war, then no safe place in world for any of us' 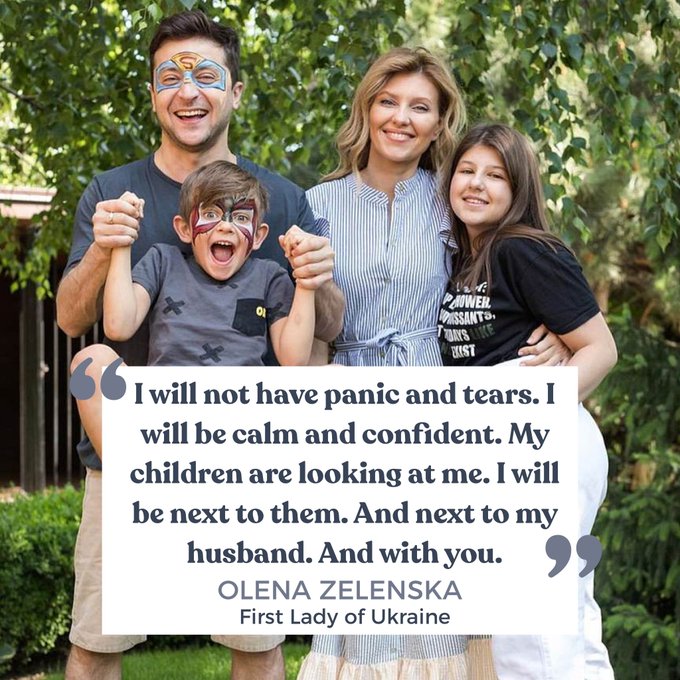 She wrote: “I am being asked for an interview by media from all over the world. We don't know how long [war with Russia] will last."

She added, "If we don't stop [Vladimir] Putin, who threatens to start a nuclear war, there will be no safe place in the world for any of us." She further wrote, "We'll win. Because of our unity."

The open letter from Olena Zelenska

"Currently, I am being asked for an interview by media from all over the world.

I want to reply to everyone at the same time with this letter.

These are my signs from Ukraine.

Over a week ago, what is happening at the moment was still unthinkable. My country was peaceful and the metropolis, cities and villages were filled with the joys of everyday life.

On the 24th In February, we wake up with the announcement of the beginning of the war. Tanks crossed the Ukrainian border, planes invading our airspace. Cities were surrounded by rocket launchers.

I bear witness: despite the Kremlin's propagandists' testimony, the invasion is a "special operation", it is actually the murder of peaceful civilians.

The worst part is to read about child victims. Eight-year-old Alisa who died in the street of Okhtyrka whose grandfather tried to protect her with his body. Or Polina from Kyjiw who died along with her parents in the shooting. Or about the 14-year-old Arsenij - in a once peaceful suburb of the capital, a wreck hit the boy's head, which the ambulance simply couldn't reach due to strong fire.

If Russia should once again claim that it is "no war against the civilian population", then I will be the first to call these names.

I testify that our women and children are now living in air protection bunkers and basements. I guess they saw the pictures from the subway of Kyjiw and Kharkiw where people with their babies and pets are lying on the ground. For some it is spectacular footage, but for Ukrainians it is the new terrible reality for a week. There are cities where families can't get out of air protection bunkers for several days.

Our children have their classes in basement. And some are already born there because extinguishing stations had to be moved to the underground. The first child of war, who saw not the peaceful sky, but the concrete ceiling of the cellar, was born on the first day of the invasion. Now there are dozens of children who have never known peace in their lives.

I bear witness: This war is not only waged by the firing of the civilian population: People who are dependent on constant treatment and care cannot receive these quality.

Is it easy to inject insulin in the basement? And getting asthma meds under fire? Not to mention the thousands of cancer patients for whom vital chemotherapy and radiation had to be postponed.

The population of the cities is full of despair, cut off by war. People with disabilities, wheelchair-bound, sick and lonely elderly people stay away from relatives and help.

War against such people is a double crime!

Our roads are full of refugees - in many of your countries you can already see the tired women and children with pain in the eyes. The men take them to the limits and return to the fight.

Finally, the Ukrainians won't give up despite all these horrors.

The occupier believed the Ukrainian cities would be conquered by a flash war.

But unexpectedly he pushed resistance, not only through the Ukrainian army, but also through the entire population. Ukrainian or Russian-speaking Ukrainians of different political beliefs, religions and nationalities unite in the face of the invasion like never before.

The residents of the attacked cities agree on the social networks and patrol the houses, help the lonely, prepare food, collect medicines and ammunition for the defenders. They simply do their job - in pharmacies, businesses, in transport, in public services - so that life goes on and wins.

I thank all of them that now all Ukrainians have joined the army and volunteered so that the attacker's plans were crossed.

I bear witness: although the attacker is hiding it, the military losses on the Russian side are in the thousands. We set up a hotline for mothers from Russia so they know that their sons are not in a military exercise, as the Kremlin reports, but dying trying to conquer Ukraine.

I bear witness: Ukraine wants peace! But Ukraine will protect its borders and identity and will never capitulate.

What we need and what we are talking about around the world - close the heavens! Finally take off your white gloves, you won't be able to maintain neutrality anyway. Because next time Putin might come to you. Close the heavens, on the earth we alone will survive.

In cities where the fire continues, where people are under rubble and are unable to get out of basements for days, not even to get food, we need safety corridors for the delivery of humanitarian aid Helping and transporting civilian population to a safe place.

On this occasion, I ask you to provide us with humanitarian help and thank those who already do. And also to those who protect our women and children.

And I thank all the people of their countries who gather in places to support Ukraine. We see and appreciate it! You guys are amazing!

I appeal to them, worthy media: continue to show them what is happening in Ukraine and show them the truth. In the information war that the Russian Federation has unfolded, every testimony is of crucial importance.

With this letter, I also testify and want to let the world know: the war in Ukraine is not a war “somewhere out there”. This is a war in Europe and on the EU borders.

Ukraine is stopping a power that can invade your cities in the most aggressively tomorrow under the pretext of saving civilians.

If we don't stop Putin, who is threatening a nuclear war, there will be no safe place in the world.

I know - it's like a nightmare and a week ago it seemed like an exaggeration, but it's a reality we currently live in. And we don't know how long it will last.

But we will definitely win. We stand for each other and we have a weapon called unity. Unity in love with Ukraine.