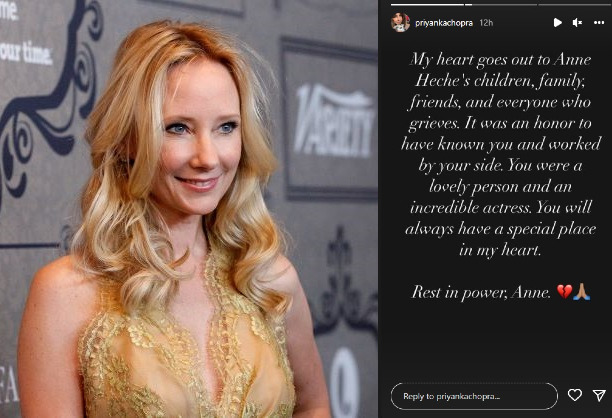 US actress Anne Heche is dead but will remain on life support to allow for a possible organ donation, her representative has said. The 53-year-old had been in a coma for a week after crashing her car into a house in Los Angeles, reports the BBC.

“Today we lost a bright light, a kind and most joyful soul,” her family said in a statement on Friday.

Heche appeared in films including ‘Volcano’, ‘Donnie Brasco’ and the 1998 remake of ‘Psycho’.

The mother-of-two also appeared on ‘Dancing with the Stars’ in 2020.

According to the Los Angeles Fire Department (LAFD), Heche’s vehicle “erupted in heavy fire”, which took 59 firefighters more than an hour to fully extinguish. The two-storey home she crashed into was left “uninhabitable”.

As well as suffering burns, the actress was left with “a severe anoxic brain injury”, when the brain is deprived of oxygen, the BBC quoted her family as saying.

A representative said the late actress is “legally dead”, but added that her life-support treatment will continue temporarily to check if she may be a match for a potential organ donation.

Priyanka Chopra shared a tribute post on her Instagram stories. "My heart goes out to Anne Heche's children, family, friends, and everyone who grieves. It was an honour to have known you and worked by your side. You were a lovely person and an incredible actress. You will always have a special place in my heart," her post read.

“Anne will be deeply missed but she lives on through her beautiful sons, her iconic body of work, and her passionate advocacy,” her family’s statement said.

“Her bravery for always standing in her truth, spreading her message of love and acceptance, will continue to have a lasting impact.” Born in Ohio in 1969, Heche and her family moved around many times during her childhood.

When she was 13 years old, her father died of HIV/AIDS, and she later said in her 2001 memoir ‘Call Me Crazy’ that he had repeatedly raped her as a child.

In interviews promoting the book, she said the abuse caused her to be “insane” for the first 31 years of her life and that she had created a fantasy world called the ‘Fourth Dimension’ to make herself feel safe.

Three months after her father’s death, her brother was killed in a car crash, which she believed was suicide. Her mother disputed both the suicide and the abuse claims and the pair became estranged.

After her family relocated to Chicago, Heche was spotted by a talent agent in a school play.

She became known in the late 1980s for portraying twins Vicky Hudson and Marley Love on the soap opera ‘Another World’. The roles won her a Daytime Emmy Award and two Soap Opera Digest Awards.

She later told interviewer Larry King it had been “heaven” working with Depp.

She played Amy Barnes, a geologist and seismologist in the disaster movie ‘Volcano’, opposite Tommy Lee Jones, while cult slasher flick ‘I Know What You Did Last Summer’ saw her portray Melissa ‘Missy’ Egan.

She also appeared in the action comedy film ‘Six Days, Seven Nights’ and the drama-thriller ‘Return to Paradise’ before portraying Marion Crane in Gus Van Sant’s remake of the classic horror film ‘Psycho’.

In 1997, having previously only dated men, she began a relationship with US talk show host and comedian Ellen DeGeneres. The couple said they would get a civil union if it became available in Vermont, but they split up three years later.

She later suffered from mental health problems and reportedly struggled with drug use, at one point being hospitalised after parking on a highway in California and walking into the desert.

In 2001, Heche married “Coley” Laffoon, a cameraman whom she met on DeGeneres’ stand-up tour, and they had a son, before divorcing nearly six years later.

She reportedly left her husband for ‘Men in Trees’ co-star James Tupper and in 2008 her representative confirmed that the actress was pregnant with her second son.

A new century brought a new direction work-wise, with roles in fewer blockbusters and more acclaimed independent films, such as drama ‘Birth’, sex comedy ‘Spread’ and 2011’s ‘Cedar Rapids’ about a naive insurance agent on a life-changing work trip to Iowa, reports the BBC.

She received an Emmy nomination for her role as Roweena Lawson in the 2004 TV film ‘Gracie’s Choice’, about a teenage girl who tries to raise her siblings on her own after their drug-addicted mother is sent to jail.

The same year, she was nominated for best actress at the Tony Awards after performing opposite Alec Baldwin in a Broadway production of Twentieth Century.