In a 6-3 ruling powered by its conservative majority, the court upholds Republican-backed Mississippi law that bans abortion after 15 weeks 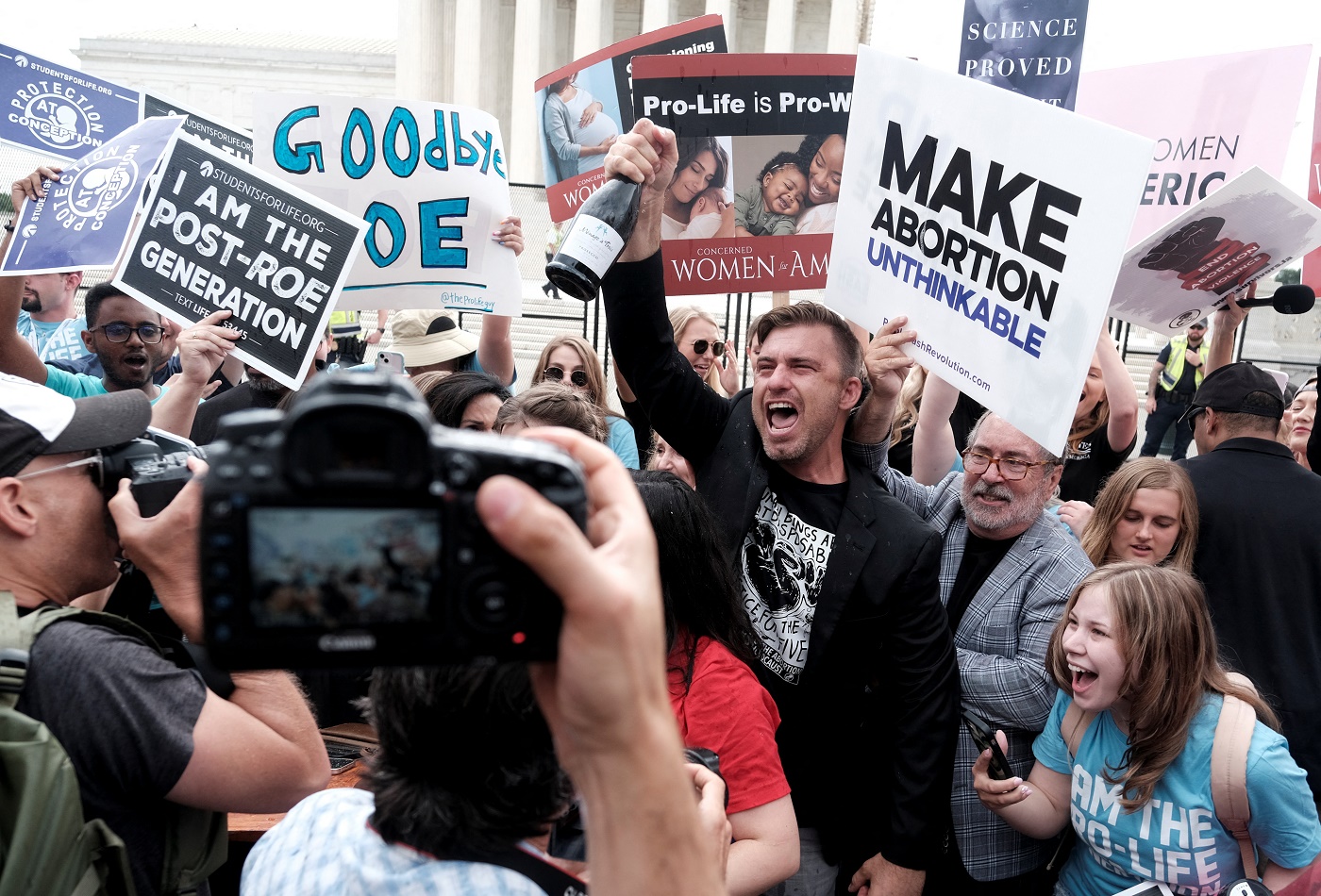 Anti-abortion demonstrators celebrate outside the US Supreme Court as the top court overturns the landmark Roe v Wade abortion decision, in Washington, US, on June 24, 2022. Reuters

The US Supreme Court on Friday took the dramatic step of overturning the landmark 1973 Roe v. Wade ruling that recognised a woman’s constitutional right to an abortion and legalised it nationwide, handing a momentous victory to Republicans and religious conservatives who want to limit or ban the procedure.

The court, in a 6-3 ruling powered by its conservative majority, upheld a Republican-backed Mississippi law that bans abortion after 15 weeks. The vote was 5-4 to overturn Roe, with Chief Justice John Roberts writing separately to say he would have upheld the Mississippi law but not taken the additional step of erasing the precedent altogether.

The justices held that the Roe v. Wade decision that allowed abortions performed before a fetus would be viable outside the womb - between 24 and 28 weeks of pregnancy - was wrongly decided because the U.S. Constitution makes no specific mention of abortion rights.

A draft version of the ruling written by conservative Justice Samuel Alito indicating the court was likely to overturn Roe was leaked in May, igniting a political firestorm. Friday’s ruling authored by Alito largely tracked his leaked draft.

“The Constitution makes no reference to abortion, and no such right is implicitly protected by any constitutional provision,” Alito wrote in the ruling.

Roe v. Wade recognized that the right to personal privacy under the U.S. Constitution protects a woman’s ability to terminate her pregnancy. The Supreme Court in a 1992 ruling called Planned Parenthood of Southeastern Pennsylvania v. Casey reaffirmed abortion rights and prohibited laws imposing an “undue burden” on abortion access.

“Roe was egregiously wrong from the start. Its reasoning was exceptionally weak, and the decision has had damaging consequences. And far from bringing about a national settlement of the abortion issue, Roe and Casey have enflamed debate and deepened division,” Alito added.

By erasing abortion as a constitutional right, the ruling restores the ability of states to pass laws prohibiting it.

Twenty-six states are seen as either certain or likely now to ban abortion. Mississippi is among 13 states already with so-called trigger laws designed to ban abortion if Roe v. Wade were to be overturned.

“Whatever the exact scope of the coming laws, one result of today’s decision is certain: the curtailment of women’s rights, and of their status as free and equal citizens,” they wrote.

As a result of Friday’s ruling, “from the very moment of fertilization, a woman has no rights to speak of. A state can force her to bring a pregnancy to term, even at the steepest personal and familial costs,” the liberal justices added.

Mississippi’s law had been blocked by lower courts as a violation of Supreme Court precedent on abortion rights.

Before the Roe decision, many states banned abortion, leaving women who wanted to terminate a pregnancy with few options. As a result of Friday’s ruling, women with unwanted pregnancies in large swathes of America may face the choice of traveling to another state where the procedure remains legal and available, buying abortion pills online or having a potentially dangerous illegal abortion.

Overturning Roe v. Wade has long been a goal of Christian conservatives and many Republican officeholders.

Republican former President Donald Trump as a candidate in 2016 promised to appoint justices to the Supreme Court who would reverse Roe. He was able to appoint three conservative justices - a third of the total - during his four years in office, moving the court rightward and building a 6-3 conservative majority.

All three Trump appointees - Justices Neil Gorsuch, Brett Kavanaugh and Amy Coney Barrett - were in the majority in Friday’s ruling.

Jackson Women’s Health Organization, the only abortion clinic remaining in Mississippi, challenged the 2018 law and had the support of Democratic President Joe Biden’s administration at the Supreme Court. The law allows abortions when there is a “medical emergency” or a “severe fetal abnormality” but does not have an exception for pregnancies resulting from rape or incest.

A federal judge in 2018 struck the law down, citing the Roe precedent. The New Orleans-based 5th U.S. Circuit Court of Appeals in 2019 reached the same conclusion.

Roberts denounced the May 2 leak of Alito’s draft opinion in the case and announced an investigation to identify the culprit.

Thousands of people rallied for abortion rights in Washington and other cities after the leak, including some protesters at the homes of some conservative justices. A California man armed with a handgun, ammunition, a crow bar and pepper spray was arrested near Kavanaugh’s Maryland home on June 8 and charged with attempted murder.

The justices in 2016  struck down a Texas law imposing strict regulations on abortion facilities and doctors. The justices in 2020 struck down a Louisiana law that similarly placed restrictions on doctors who perform abortions. But the court has become more conservative in recent years with the addition of three appointees made by former President Donald Trump.

Since 2018, the court lost two champions of abortion rights.

Liberal Justice Ruth Bader Ginsburg died in 2020, being replaced by Barrett, who as an academic before joining the judiciary signaled support for overturning Roe.

Justice Anthony Kennedy, a conservative who sometimes sided with the liberal justices on social issues such as abortion and LGBT rights, retired in 2018 and was replaced by Kavanaugh.

Kennedy was part of the majority in the 1992 decision and voted to strike down the Texas abortion restriction in 2016.

Gorsuch in 2017 replaced the late conservative Justice Antonin Scalia, who was an abortion opponent.

Opinion polls show a majority of Americans support abortion rights. But overturning Roe has been a goal of anti-abortion activists and Christian conservatives for decades, with annual marches in Washington including in January of this year.

The number of U.S. abortions increased by 8% during the three years ending in 2020, reversing a 30-year trend of declining numbers, according to data by the Guttmacher Institute, a research group that supporters abortion rights.

The U.N. World Health Organization said around 73 million take place globally each year, including 29% of all pregnancies. Reuters