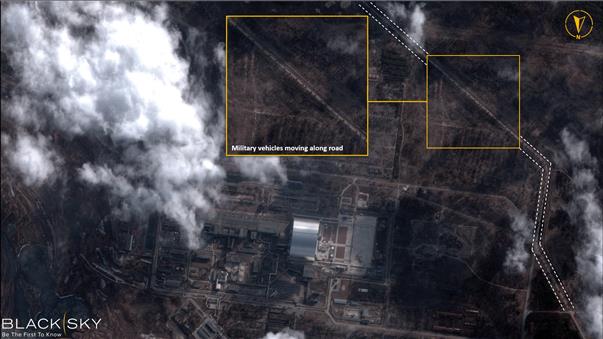 It said fighting made it impossible to immediately repair the high-voltage power line to the plant, which was captured by Russian forces after the Kremlin launched a full-scale invasion of Ukraine on February 24.

Energoatom said there were about 20,000 spent fuel assemblies at Chernobyl that could not be kept cool amid a power outage.

Their warming could lead to "the release of radioactive substances into the environment. The radioactive cloud could be carried by wind to other regions of Ukraine, Belarus, Russia, and Europe," it said in a statement.

Without power, ventilation systems at the plant would also not be working, exposing staff to dangerous doses of radiation, it added.

The still-radioactive site of the world's worst nuclear disaster lies some 100 km (62 miles) from Kyiv. Reuters

With Mariupol morgues overflowing, and many corpses uncollected at home, city authorities have decided to bury their dead in mass graves. Read story here

Systems monitoring nuclear material at the radioactive waste facilities at Chernobyl in Ukraine, which were taken over by Russian forces last month, have stopped transmitting data to the UN nuclear watchdog, it said on Tuesday.

The last big group of about 700 Indian students evacuated from the northeastern Ukrainian city of Sumy has boarded a special train from Poltava and are likely to board a flight to India from Poland on Thursday. Read story here

.All Indian students stranded in war-torn Ukrainian city of Sumy have moved out along with other foreign students and will soon board flights for home under Operation Ganga, said the Ministry of External Affairs (MEA) on Tuesday. Read full story

The open letter from Olena Zelenska warns the world of disastrous consequences if Russia was not stopped. Read full story

McDonald's, Starbucks, Coca-Cola, PepsiCo and General Electric - ubiquitous global brands and symbols of US corporate might - all have announced they were temporarily suspending their business in Russia in response to the country's invasion of Ukraine. Read full story