The name sparked a "much ado" not over nothing as creativity flowed on social media platforms. 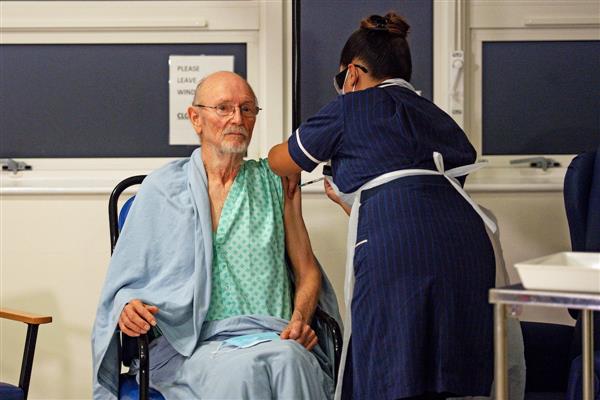 Shakespeare, who was vaccinated in front of the cameras, said he didn't even feel the needle and was glad he could contribute. Reuters photo.

The UK has begun one of its largest vaccination drives and 81-year-old namesake of the Bard of Avon, William Shakespeare, became the second citizen in the West to receive the Pfizer-BioNTech Coronavirus vaccine.

Shakespeare, who was vaccinated in front of the cameras, said he didn't even feel the needle and was glad he could contribute. "It could make a difference to our lives from now on, couldn't it?" he said.

'Bill' William Shakespeare received the vaccine in the University Hospital in Coventry in the Midlands, not far from Stratford-upon-Avon, the birthplace of the Bard.

Bill's name sparked a "much ado" not over nothing as creativity flowed on social media platforms.

'The Taming of Flu' and 'The Two Gentlemen of Corona' were trending as evidence that there is still a lot "in a name". The image of Shakespeare receiving the vaccine was widely shared.

One commentator wondered if Margaret Keenan were to be called Patient 1A, would Shakespeare be "Patient 2B or not 2B?" Another said he was "glad he (Shakespeare) wasn't Bard from having it", and some hoped that "In a world when people hardly ever remember who came second, the second person to get the Covid jab might stick in the memory".

Health secretary Matt Hancock insisted that the vaccine roll-out "makes you so proud to be British". and shared a laugh on live television that the second person to receive the vaccine was named William Shakespeare.

Before Shakespeare, 90-year-old Margaret Keenan received the first jab in one of Britain's largest immunization programs, an unprecedented global effort to try to end a pandemic that has killed 1.5 million people already.

Keenan, a retired shop clerk from Northern Ireland, received her dose of vaccine at University Hospital Coventry. The vaccine was approved by British regulators last week.

The UK became the first Western country to deliver a broadly tested vaccine to the general public.

The COVID-19 shot was developed by American drugmaker Pfizer and Germany's BioNTech. The European Union regulators are expected to approve it in the coming days or weeks.

On Saturday, Russia began vaccinations with its Sputnik V vaccine. China has also begun vaccinating the general public with its own domestically made shots. However, both the programmes are yet to finish the late-stage trials scientists consider essential for providing a safe and effective serum.

Regulators around the world are also reviewing other vaccines including one developed by U.S. biotechnology company Moderna, and another which is a collaboration between Oxford University and drugmaker AstraZeneca, a British-Swedish pharmaceutical company.

British regulators approved the Pfizer vaccine on December 2, and the country has received 800,000 doses, enough to vaccinate 400,000 people. The first shots are given to people over 80 years of age, who are either hospitalized or already have outpatient appointments scheduled, along with nursing home workers and vaccination staff.

The 800,000 doses are only a fraction of what is needed in the UK. The government is targeting more than 25 million people, or about 40 per cent of the population, in the first phase of its vaccination program, which gives first priority to those at highest risk from the virus.

In an interview to Sky News, British Health Secretary, Matt Hancock said, "I'm feeling quite emotional watching those pictures, and there is an enormous amount of work still to do but I am really grateful to everybody who has brought us to this moment." --IANS