With 71 new coronavirus deaths, number of casualties in China touches 2,663 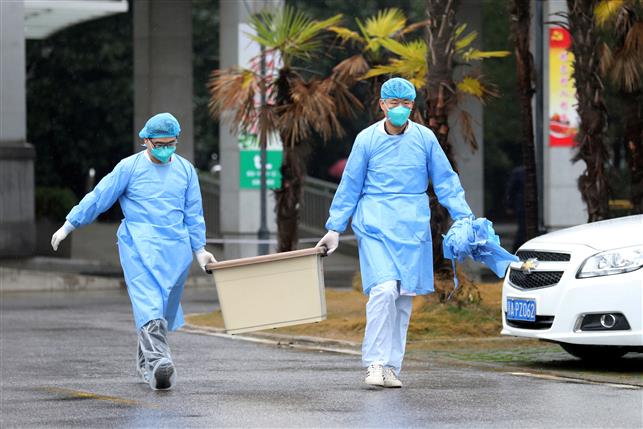 Seventy-one new coronavirus deaths were reported from China, taking the total number of casualties to 2,663, even as reports suggested that the number of new cases has seen a sharp decline.

According to a daily report released by the National Health Commission (NHC) on Tuesday, the number of confirmed cases has reached 77,658, a jump of 508 cases.

The report stated that 68 deaths were reported in Hubei, two in Shandong and one in Guangdong.

The daily number of cured and discharged patients has surpassed that of new cases for the seventh consecutive day, the NHC claimed.

A total of 27,323 patients had been discharged by the end of Monday, it said.

The agency reported that Monday marked the sixth consecutive day when China’s daily number of new infections remained under 1,000.

Confirming the declining trend, Canadian epidemiologist Bruce Aylward, who headed the WHO mission to China, said the drop in the number of cases was possible due to actions taken by the Chinese government.

“I know the challenges with the statistics that come out of China, sometimes with changing numbers. What we had to do is to look very carefully at different sources of information to say confidently this is actually declining,” Aylward told reporters here.

“A lot of compelling data and observations on the ground support this,” he added.

Aylward headed the first WHO technical team on February 10 and later paved the way for a 12-member expert team that arrived in Beijing last Monday.

The team, along with Chinese experts, visited worst-hit Hubei province over the weekend to conduct field investigations on the virus outbreak.

Aylward said when he arrived in Beijing on February 10, China was reporting about 2,500 cases a day, which had now declined to over 400.

The observation was made from the data collected from fever clinics and the availability of hospital beds, he said, stressing that the numbers dropped amid heightened awareness and the push to get oneself tested.

Secondly, doctors in Wuhan are for the first time reporting vacant beds in hospitals to accommodate new patients, he said, adding that earlier China had to build two makeshift hospitals with a capacity of 2,300 beds.

“The (WHO) team wanted to be convinced. Very rapidly multiple sources of data point to the same thing that the cases are falling and they are falling because of actions that are being taken,” he said, adding that the world needed the experience and expertise of China.

Elaborating further, Aylward said old approaches like suspension of travel and quarantine were used to contain the spread of the virus by the Chinese authorities.

“These significant measures could only be adopted with tremendous collective will, not only in the community but also top officials, which is rare to see,” Aylward said.

Liang Wannian, who headed the Chinese expert team, said the deadly virus had not significantly mutated.

“The animal host has not been confirmed--a bat could be the host, but also a pangolin,” Liang Wannian said.

“The transmission route is respiratory droplets. The fecal-oral route needs to be further studied,” Liang said in the joint press conference with Aylward.

Liang said 3,000 medical staff, mostly in the worst-hit Wuhan, are estimated to have been infected by the virus. Ten medical staff have died. PTI