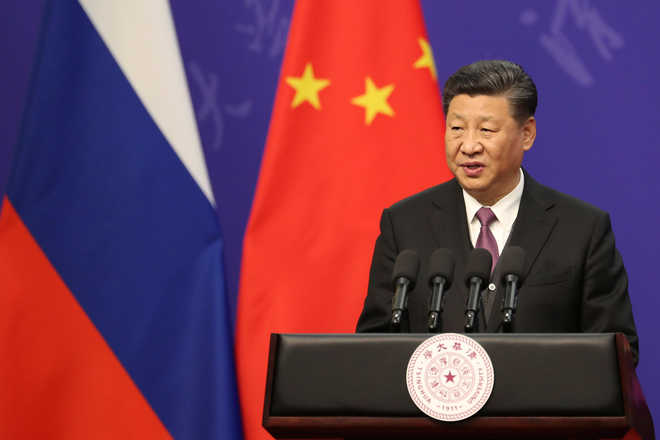 Chinese President Xi Jinping on Sunday instructed officials to expedite the construction of the new USD 47.8 billion railway project connecting the country’s southwest Sichuan province to Linzhi in Tibet close to the Indian border in Arunachal Pradesh, saying it would play a key role in safeguarding stability in the border areas.

The Sichuan-Tibet Railway starts from Chengdu, capital of Sichuan province and travels through Ya’an and enters Tibet via Qamdo, shortening the journey from Chengdu to Lhasa from 48 hours to 13 hours.

The India-China border dispute covers the 3,488-km-long Line of Actual Control, the de-facto border between the two countries. China claims Arunachal Pradesh as part of south Tibet which is firmly rejected by India.

Linzhi also has an airport which is one of the five airports built by China in the Himalayan region.

The Ya’an-Linzhi section runs 1,011 km with 26 stations. Trains are expected to run at speeds between 120 and 200 km per hour. The total cost of the entire Sichuan-Tibet Railway project is around 319.8 billion yuan (USD 47.8 billion), according to a recent report by the state-run Global Times.

In a video conference, ahead of the commencement of the construction of the project, Xi identified it as a major measure in facilitating the ruling Communist Party’s general plan for governing Tibet in the new era, and stressed the project’s important role in safeguarding national unity, promoting ethnic solidarity and consolidating stability in border areas.

He made the instruction ahead of the beginning of the construction of the Sichuan-Tibet Railway’s Ya’an-Nyingchi section on Sunday, state-run Xinhua news agency reported.

The Sichuan-Tibet Railway will not only accelerate and enhance the overall economic development of the Tibet region, but will play an important role in safeguarding border stability, the Global Times said.

The project would significantly contribute to the economic and social development of the western region, especially in Sichuan province and Tibet Autonomous Region, Xi said.

Underlining the complex geological and climatic conditions, as well as fragile ecological environment along the project line, he called for leveraging China’s advantage of concentrating resources to get things done to accomplish this historic task, which is arduous but glorious.

The construction should be carried out in a scientific, safe and eco-friendly way, Xi said, apparently referring to the fragility of the area as it is one of the world’s most active seismic regions.

Speaking at the meeting, Chinese Premier Li Keqiang emphasised prioritising the safety, reliability and quality of the project, and called for coordinated efforts in promoting construction, epidemic prevention and people’s well-being.

The 1,011-km section between Ya’an in Sichuan and NyingChi in Tibet is the third part of the Sichuan-Tibet Railway, which will be carried out by the China State Railway Group Co., Ltd.

The project’s Chengdu-Ya’an section became operational in December 2018, and the construction of the Lhasa-Nyingchi section started in June 2015, the Xinhua report added. — PTI