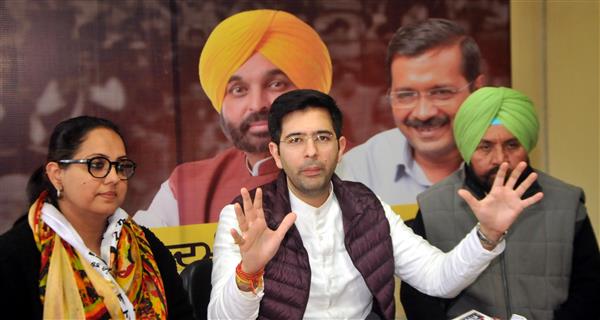 Aam Aadmi Pary (AAP) Punjab affairs co-in-charge Raghav Chadha lambasted PPCC president Navjot Singh Sidhu and Akali leader Bikram Singh Majithia and said both the leaders were undeserving for Amritsar East. Chadha said public service could not be expected from Majithia as he himself is an accused in drug mafia case.

On the other hand there is Navjot Sidhu who has been representative of the people of Amritsar for the last 15 years as an MP and MLA and still has done nothing for the people there. Raghav Chadha said AAP candidate from Amritsar East Jeevan Jyot Kaur hailed from a common family and she understands the hardships of the common people. Raghav Chadha said all surveys showed that Aam Aadmi Party was forming the government in Punjab. So, he appealed to the people of Punjab not to waste their vote.

“Your one vote will lay the foundation for the future of your children as well as the golden future of Punjab," said Chadha. He said that people of Amritsar should vote for the Aam Aadmi Party too, as Aam Aadmi Party's government in Punjab is certain. Jeevan Jyot Kaur thanked AAP for giving her the responsibility and said that she will live up to the expectations of the party and the people of Amritsar East constituency.