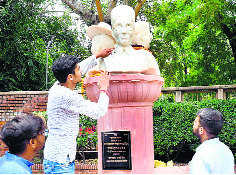 On Wednesday, the National Students Union of India (NSUI) had put a garland of shoes around Sarvarkar’s bust and tarred its face.

The ABVP has also demanded stringent legal action against those involved from the NSUI for insulting our freedom fighters to meet their petty political interests. Left-affiliated student organizations, CYSS and NSUI have stooped down to a very low-level and acts such as these were a major blow to the culture of debate and discourse prevalent in the university.

The ABVP Delhi’s State Secretary Sidharth Yadav said, “It is very unfortunate that the DU administration turned a deaf ear to the DUSU’s demand for installation of busts of freedom fighters for a very long time. University should restore the busts as promised, at the earliest.”

“Also the manner in which other student organisations have carried out such unfortunate acts reveal the real and degraded mindset of these organisations towards freedom fighters, the repercussions of which they will face in the times to come. At the same time, the Congress should understand that its ‘Kaalikh model’ is not going to hide the reality. We have decided to remove the busts because we don’t want to do politics over the name of freedom fighters,” he added.