NEW DELHI:The enthusiasm among the residents of Bawana Assembly constituency appears to have received a beating if the voters’ turnout for the seat—which saw a decline from 2015 Delhi Assembly elections’ 61.83 per cent to 45 per cent—is anything to go by. The voting began at 8 am and progressed at a slow pace in the first few hours and rose to 24.39 per cent even after five hours of voting at 1 am, said officials. 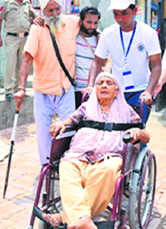 An old woman and her husband going to cast their votes at a polling booth during the Bawana Assembly by-election in West Delhi on Wednesday. Tribune photo

The enthusiasm among the residents of Bawana Assembly constituency appears to have received a beating if the voters’ turnout for the seat—which saw a decline from 2015 Delhi Assembly elections’ 61.83 per cent to 45 per cent—is anything to go by.

The voting began at 8 am and progressed at a slow pace in the first few hours and rose to 24.39 per cent even after five hours of voting at 1 am, said officials.

Over 2.94 lakh electors were eligible to exercise their franchise in the bypoll carried out through 379 polling stations where EVMs equipped with Voter Verifiable Paper Audit Trail (VVPAT) were used.

Glitches were seen in the machines, with polling body confirming the same. As per officials, five ballot units (BU) and control units (CU) each while 34 VVPAT devices were replaced during mock poll while one BU and CU each and 17 VVPATs had to be changed due to error report while polling was under way.

Besides, no untoward incident was reported from the area during the day, said polling officials.

The north-west Delhi seat was expected to have a three-cornered contest between the ruling Aam Aadmi Party (AAP), the Bharatiya Janata Party (BJP) and the Congress even as eight candidates are in the fray in the election.

All three major political parties are eyeing a victory in the bypoll seeing it as an indicator of their political influence. The AAP enjoying an overwhelming majority in the Assembly wants to win the by-election to boost its confidence, especially after successive setbacks in the civic polls, the Rajouri Garden Assembly polls and the Punjab and Goa elections. The AAP has fielded Ram Chander from the constituency

On its side, the saffron party having just four members in the 70-member House hopes to continue its winning streak in the national Capital while the third major contender of the Congress is keen to open its account after being relegated to zero seat in the Assembly.

It has fielded its former three-time MLA from Bawana, Surender Kumar who is contesting against AAP’s Ram Chandra and the BJP’s nominee Ved Prakash, whose resignation as an MLA from Bawana actually led to the bypoll.

Prakash had contested the 2015 Assembly elections on an AAP ticket and left the AAP to join the BJP in March this year. The counting will take place on August 28.

Minister Imran Hussain has been booked for allegedly “issuing” pamphlets seeking votes in the name of religion for the Aam Aadmi Party in the Bawana Assembly bypoll, said a senior police official.

The complaint was filed by the returning officer of the Bawana bypoll. An FIR was registered in connection with the matter yesterday at the Bawana Police Station, said the official.

Therefore, a case has been registered under the relevant sections of the Representation of the People Act and the Indian Penal Code, the police said.

The complainant alleged that "the pamphlet prima facie makes an appeal to the Muslim residents of Bawana to vote for ‘quom’ (community). In addition to this other objectionable and communal appeal has been made (sic)".

A BJP delegation, led by its president Manoj Tiwari, today raised the issue with the Chief Election Commissioner, a spokesperson for the party said.

"The delegation demanded action against Hussain for seeking votes in the name of religion," said Leader of Opposition Vijender Gupta.