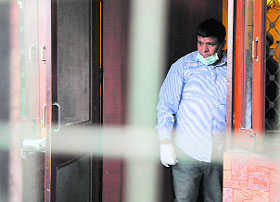 In the theft, the Nobel citation was allegedly stolen from the house. The child rights' activist, who won the peace prize in 2014, had shared it with Malala Yousafzai from Pakistan.

A case has been registered at Kalkaji police station and a forensics team was called in to lift fingerprints and footprints.

In a statement, Satyarthi, who along with his wife is currently in Panama on the invitation of its President, implored the people involved in the early morning act to understand the significance of the award and not get carried away by its monetary value.

Satyarthi had presented his Nobel Peace Prize medal to President Pranab Mukherjee in January, 2015. The original medal has been preserved and is now on display at the Rashtrapati Bhavan Museum, his office said.

Police said the theft came to light when Rakesh Sengar of Satyarthi's NGO Bachpan Bachao Andolan went to take his car from the activist's Kalkaji residence Aravalli apartment around 9 am.

"I had gone there around 9 am. I saw the dhobi (washerman) knocking the door which was surprisingly open. When I entered the flat, I found things scattered all over (in Satyarthi's bedroom). The locker was also broken.

"The replica of the nobel, which is as good as the original, and the citation are missing along with a host of other mementos from around the world and some jewellery. A similar theft had occurred in BBA's Kalkaji office in 2010," Sengar said.

Police said it appears that the burglars had come with an intention only to rob jewellery as the other expensive items were left untouched. They must have mistook the replica as a jewellery item, a senior officer said.

"The Nobel Prize citation and the replica were kept in jewellery boxes and we suspect that the burglars took them away thinking it to be jewels. It's a specific modus operandi," said the officer.

Satyarthi's son, Bhuvan Ribhu, a senior Supreme Court lawyer and the national secretary of Bachpan Bachao Andolan, said, "Sengar informed me about the incident. It appeared that they were looking for something specific. They also took some ancestral jewellery. For someone who continues to stay in a DDA flat, the news was shattering. Satyarthi is returning (to the country) on the 10th," he said.

After police were informed about the alleged theft of the Nobel Prize replica, teams from Forensic Science Laboratory, dog squads and district crime unit inspected the spot and collected fingerprints.

Police said all the lockers of the master bedroom have been broken and it is suspected that the burglary took place in the wee hours today.

The child rights activist won the Nobel Peace Prize in 2014. He shared the prize with Pakistan's Malala Yousafzai.

Rabindranath Tagore's Nobel Prize medal had been stolen in 2004 from Visva Bharati University's museum in Santiniketan in West Bengal, which is yet to be recovered.