NEW DELHI: The National Green Tribunal has slapped a fine of Rs 7 lakh on a banquet hall adjacent to a hospital in Noida for causing noise pollution. 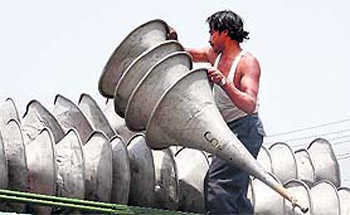 The National Green Tribunal has slapped a fine of Rs 7 lakh on a banquet hall adjacent to a hospital in Noida for causing noise pollution.

Imposing a complete ban on the use of loudspeakers in the area to curb noise pollution, a Bench headed by Justice Jawad Rahim directed Punjabi Club in Noida’s sector 29 strictly conform to the prescribed noise level norms.

It asked the Uttar Pradesh pollution control board to maintain a strict vigil and conduct periodical visits to the club to ensure that it under no circumstances, violates the guidelines.

The NGT said the club has been running for ten years without permission the board and has caused severe noise pollution affecting the life of the people and patients in the hospital.

It ordered the banquet hall owners to pay environmental compensation of Rs 5 lakh to the Bhardwaj Hospital and Rs 2 lakh to the board as a deterrent against future violation.

The bench passed the order after perusing an inspection report of the board which said the noise levels exceeded the standard values prescribed under the Noise Rules, 2000.

It directed the banquet hall to use double-glazed windows to contain the sound within its premises and create a wall of tall trees around the lawn to minimise the sound level going out.

The green panel directed the Noida municipal authorities to put signage which will display the penalty and fine in case of violation under the Noise Pollution (Regulation and Control) Rules, 2000 at least at five places including areas near hospitals, to make the citizens aware of the laws.

The verdict came on a plea filed by Noida resident Rajeev Rai who had approached the green panel complaining about the noise pollution caused by the banquet hall located next to a 40-bed hospital and a church.

Rai, who lives close to the banquet hall, had said that Punjabi Club, which was located within the 100 metre-radius of the hospital, fell under “silence zone”.

He had sought immediate steps to curtail noise pollution in the area and a complete ban on use of loud speakers there. — PTI