NEW DELHI:Strong winds on Saturday abated the smog lingering over Delhi-NCR for the last four days, resulting in a decline in pollution levels. 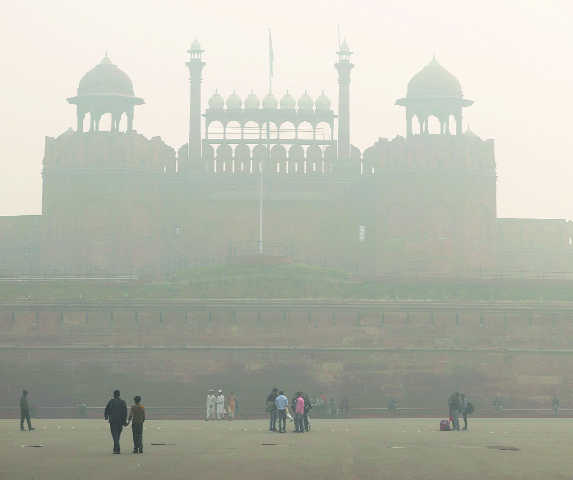 The air quality index of Delhi read 357 at 4 pm on Saturday.

Strong winds on Saturday abated the smog lingering over Delhi-NCR for the last four days, resulting in a decline in pollution levels.

“Strong surface winds, gusting up to 25 km per hour, blew in the region, reducing the smog and bringing slight relief. “Windy conditions are expected on Sunday as well and the air quality will improve further in the next two days,” Kuldeep Srivastava, a senior scientist at the India Meteorological Department, said.

Schools in Delhi and neighbouring Ghaziabad, Noida and Greater Noida also reopened on Saturday after remaining shut for two days in view of a harmful spike in air pollution. The System of Air Quality and Weather Forecasting and Research (SAFAR), the government’s air quality monitor, said strong boundary-layer and surface winds were flushing out the accumulated pollutants.

A drizzle last night would have delayed the recovery but that did not happen, it said. “High surface winds in Delhi are predicted to continue for the next two days. The effective stubble fire count is low. Even if it is high, transport-level wind direction is not favourable (northerly), and the speed is so high (42kmph) that plume will surpass Delhi and complete its lifespan before it touches the bottom end of the Indo-Gangetic plains (Mathura-Agra),” a SAFAR official said.

The share of stubble burning in Delhi’s pollution on Sunday is predicted to be not more than 2%, the official said. The AQI is likely to enter the poor category on Monday. — PTI