Creation is the only proof that I am there: Satish Gujral 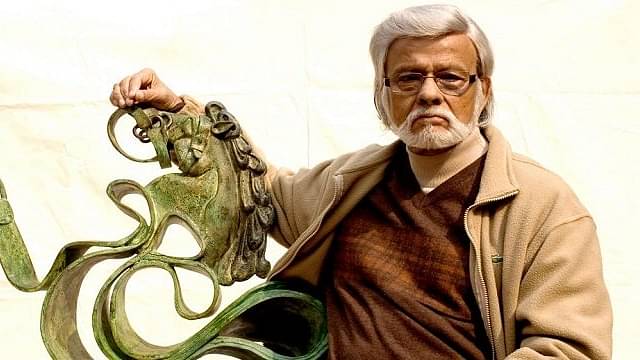 "This article was first published in The Tribune on April 6, 2008"

The last time I had spoken at length to Satish Gujral was in the spring of 2006 when the National Gallery of Modern Art had organised a retrospective of his works. Conversation with Gujral cannot be limited to just art or art forms. He feels intensely about life and everyday living, and, definitely about the political scenario. He expresses himself with such an abundance of feelings, gestures and facial expressions that the conversation simply flows. And, of course, whenever he gets stuck, there’s his wife Kiran to bail him out.

Impressions of a lifetime

The pain of creation

And, now, after a gap of two years, I met him at his Lajpat Nagar home again. His home stood out as elegant as ever, as did he and Kiran. We began by talking about his show titled Metamorphosis, which began on March 30 at the Lalit Kala Akademi. His new works — canvas and bronze — stood out, spread out. Some of his latest works were gold toppled. To the queries, he simply said like in those olden days when gold was used to paint, he has tried doing so. Gold works on black backgrounders simply stood out.

When I asked him if the present-day scenario upset him, he said, "For one of my earlier exhibitions I’d worked on this particular theme — from the depth of pessimism I’m trying to find the fountain of youth. I have witnessed lot of violence during the Partition. So pessimism has always been there. Yet, you have to create — for creation is the only proof that I’m there, of my being there. After all, happenings produce feelings and the artist has to put those feelings on the canvas. Unlike a writer or a journalist, the artist has got little ideas but an abundance of feelings. And for this there is no set period. It is, after all, a process. An artist keeps absorbing and putting his feelings on canvas."

Do certain situations and happenings leave you feeling depressed? "No, I would not like the word despair. I’d say instead there could be an overwhelming doubt in my being but, then, my life has been a continuous process to eliminate the very stillness and to build confidence this is what I have been portraying right from what I’d witnessed during the Partition. I’d stayed back with my father in Pakistan (after the Partition) for some months and what disasters I saw. Usually it would take just about three hours to reach Jhelum from Lahore but those days it would take 10 hours or even longer because of the killings going on and here let me also say that it’s the outsiders who came and killed and not the locals our own family in Jhelum was protected from the Afghan raiders by Raja Ghazanfar Ali".

After the Partition, we came on to what’s been witnessed in today’s India — another sort of partition in places like Maharashtra, where bhaiyyas and Biharis were being targeted and hounded out, especially when we claim to be developed and the economic growth rate is increasing.

Looking upset, he spoke out, "What’s happening around whether in Maharashtra or elsewhere shows a lack of tolerance in the society. Mind you, economic development does not mean it will translate into spiritual development`85economic development could also produce greater intolerance. After all, the US is the richest country, but see what they are doing in America and Afghanistan or to their own coloured people. Economic growth does not mean tolerance."

Whilst on tolerance and intolerance, we moved on to freedom of an artist like M. F. Husain who is living in a sort of exile (in Dubai and the UK) and that too at 93.

On the present-day Pakistan, he had a lot to say. In fact, he was emotionally very charged about the subject.

When he travelled to Lahore in 1986 — the very first time after the Partition — he was so emotionally surcharged that he suffered a heart attack and had to be admitted to a hospital for a week. Thereafter he travelled just once more to Lahore, with the former prime minister Atal Bihari Vajpayee. He has an emotional link with Lahore. Because he mastered his art forms/techniques in Lahore’s National College of Arts. To this day, he has several close friends there. Recounting a touching incident, Gujral said, "When I suffered that heart attack in a hotel in Lahore, Kiran didn’t know what to do, where to take me. She called up one of our lawyer friends Etajaz Hussain and told him about my condition. He was appearing in the court, arguing a case but in the middle of an argument, he apologised to the judge and rushed to take me to the hospital. Tell me who will do that."

Both he and his brother, I. K. Gujral, are hopeful of better relations between India and Pakistan. Said Gujral, "What makes me hopeful is that there’s a growing feeling in Pakistan’s younger generation that there should be no baggage of the past and both countries could benefit on the economic front by joint collaboration. The fact that there’s great disillusionment in Pakistan vis-a-vis the army, it is surprising how warmly the people of the two countries meet, especially when they are meeting abroad. Because they share the same heritage, the same roots"

Is it not surprising that till date he has not taken any of his solo shows to Pakistan? To that he simply smiled and with an abundance of feelings said he would be happy, very happy doing so.