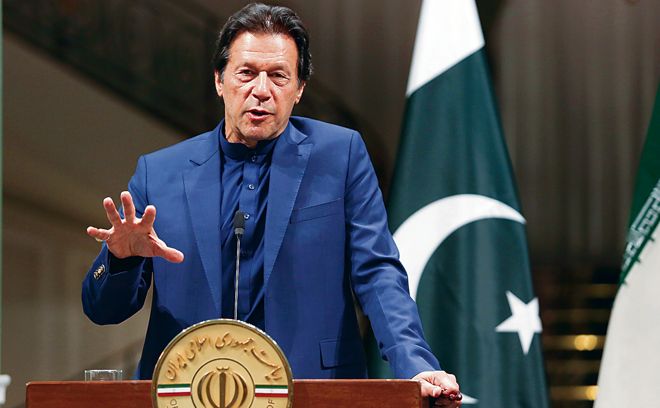 Animosity: The pettiness shown by Imran towards the media is unprecedented.

Few in India would have heard about Mir Shakil-ur-Rahman, though many would know about the Jang/Geo Group that runs several print and electronic platforms in Pakistan. Mir Shakil-ur-Rahman, or MSR as he is popularly called, is the Editor-in-Chief of the group and has been in custody since March 12.

Pakistan should immediately vacate all areas under its illegal occupation: MEA on Pak SC order on Gilgit-Baltistan

MSR was arrested in a 1986 land deal. Whatever the merits of the case, most lawyers agree that the arrest was an egregious attempt at harassment — the investigations were in the initial stages, MSR was fully cooperating with the National Accountability Bureau (NAB) and all the documents had been seized. Despite this, he was arrested to satisfy the ego of Imran Khan since MSR had refused to ask TV anchors and print journalists to avoid stories critical of the government’s performance. According to politicians quoted in the media, Imran Khan was on record as having said he would fix Jang/Geo.

In Pakistan, the use of instruments of state to persecute opponents has been par for the course. Despite this, the kind of vindictiveness and pettiness shown by Imran Khan is unprecedented. The arrest of MSR is simply the latest in the harassment of the media since he became PM.

For months, media groups seen as critical of the government have been targeted. Thus, home delivery of newspapers was disrupted by threatening distributors and hawkers; government advertisements more or less disappeared from some media groups; cable operators were told to either block channels or shift the location from their usual slot to the last numbers on the cable network to confuse viewers. The purpose was to reduce the viewership/readership while starving targeted groups of advertisements to ensure that they fell in line.

In 2019, a live Geo News interview of former President Asif Zardari by well-known journalist Hamid Mir was cut short after just a few minutes without any explanation. A live interview with Maryam Nawaz, daughter of Nawaz Sharif, on Hum News was ‘stopped forcefully’ a few minutes into transmission. The signals of three other Pakistani TV news channels, AbbTakk TV, 24 News and Capital TV, were suddenly suspended from cable TV services on July 8, 2019, and remained suspended for several days due to coverage of Maryam Nawaz.

Journalists like Talat Hussain, Najam Sethi, Nusrat Javed and Murtaza Solangi have been forced out of their jobs. Some like Taha Siddiqi and Gul Bukhari were lucky to have found refuge abroad. Some like Sajid Hussain, who had been living in asylum in Sweden for his reporting on Balochistan, have turned up dead.

To protest MSR’s arrest, the workers of the Jang/Geo group have launched countrywide demonstrations and established hunger strike camps in different cities. Various media organisations and prominent Opposition politicians have joined them, seeking MSR’s release. The legal fraternity and business groups, too, have declared the arrest illegal.

The developments have been noticed internationally. The US State Department has viewed the arrest ‘with concern’; in the UK, parliamentarians have condemned the incident. The Commonwealth Journalists Association has called on Pakistan to release MSR. Another organisation has filed complaints at the UN Working Group on Arbitrary Detention, and with the UN Special Rapporteur on the Promotion and Protection of the Right to Freedom of Opinion and Expression. The International Press Institute, in a letter to Imran Khan, has expressed its extreme concern over the continued detention of MSR, saying it was designed to convey the message that any criticism of the government would have dire consequences for the survival of an independent Press in Pakistan.

Despite all this, Imran Khan continues to lie through his teeth when asked about curbs on the media. All that he parrots is that Pakistani media has more freedom than the British media and cites his own experience of living in the UK for 18 years.

Reporters Sans Frontieres (RSF) directly contradicted Imran Khan when it termed his assertion of freedom an obscenity. In an open letter on July 31, 2019, it called on him to recognise the alarming decline in the state of Press freedom in his country and to take urgent measures to address it. According to the World Press Freedom index 2020, the RSF indicated that Pakistani media had become a priority target for the country’s ‘deep state’ and the influence of the establishment had increased dramatically since Imran Khan became PM in 2018. In a recent report, the European Commission noted that there had been a ‘serious deterioration of media freedom in Pakistan, a trend that began in the lead-up to the general election in 2018’, with national security widely used as a ‘pretext for cracking down on freedom of expression’.

Realising that Imran Khan had boxed himself into a corner with the media, the army has stepped in and appointed one of their own, Lt Gen Asim Saleem Bajwa (retd), former DG ISPR, as adviser to the PM on information. From this vantage point, he would attend cabinet meetings and keep an eye on the government’s functioning. It would be interesting to see how he retrieves the situation. For one thing, it is quite likely that MSR would be released on bail sooner or later to defuse the immediate media anger and animosity towards the government. For the longer term, Bajwa’s brief would be to rebuild Imran’s image and popularity that has taken a severe beating since he became PM, and especially due to his poor handling of the Covid-19 pandemic. This would indeed be an uphill task, given Imran Khan’s incapacity to govern.