It was on September 11 at around 9pm that police in Canada received a call of an incident of hooliganism by some 40 Punjabi youths in Strawberry Hills. 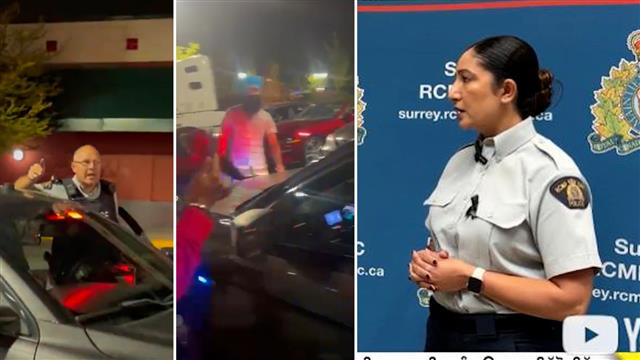 Constable Sarbjit Sangha in an interview to a Punjabi Canadian channel ‘Prime Asia TV’ spoke of how a group of 40 Punjabi youths indulged in lawlessness when a police officer issued a “notice of order” to a car driver, who was roaming around Strawberry Hill Plaza 72nd Avenue playing loud music for three hours.

Sangha said Punjabis had contributed a lot to Canadian economy and development but some elements were causing trouble and bad name to the community.

When the traffic officer went to the spot, the youth misbehaved with him and allegedly intimidated him.

It so happened that a private plaza security officer called the police after they noticed a car roaming with loud music for over three hours causing disturbance in the area.

It took the patrolling officer half an hour to locate the car. Once found, the traffic unit officer asked the driver to stop his vehicle.

When the car was inspected, it was found that it had “illegal defects”. The owner of the vehicle had fixed a high-bass speaker and also redesigned and altered the original shape of the car so that the engine made a loud sound, which was illegal.

The car owner was playing loud music while driving for close to over three hours and during this time he was accompanied by dozens of youths.

The officer issued a ticket to him asking him to remedy the defects in the car and report to him.

However, the behaviour of the driver was disruptive and uncooperative.

As the communication between the officer and the driver was taking place, other youths with him started yelling and made videos.

The officer felt unsafe and decided to move from that spot even though he had asked for a backup.

But as the backup force would have taken time to reach the spot, he decided to leave immediately fearing for his life.

As the officer was leaving, the youths obstructed and blocked his way.

One person even tried to open the door which was intimidating and can amount to a very serious charge.

Sarbjit Sangha alleged that the moment the ‘notice of order’ was issued by the police officer, the youths started thumping the bonnet of the police officer’s vehicle and also blocked his way. In the video, they can be seen trying to trespass into his vehicle. There were about 40 Punjabi youths, mostly students, who misbehaved with him.

Sangha said the investigations are under way and they have not made any arrests so far. She said that they were in the process to identify the youth and will act as per the law. As far as deportation was concerned, she said no one has been deported as of now, but they may face it as the police frame the charges which are “serious”.

She said they had received several complaints regarding several youths from Strawberry Hills of hooliganism and many people from the Punjabi community avoid going to the area as there have been incidents of teasing and inappropriate behaviour by the youths.

She said the police were educating the Punjbais on regular basis how to adapt to the peace-loving Canadian community and have appealed to the Punjabi youths not to indulge in lawlessness and hooliganism.

Sangha said Punjabis had contributed a lot to Canadian economy and development but some elements were causing trouble. "The video recording shows about 40 youths, mostly students and visitors, who are being investigated into and can face deportation," she said.