He’s a star international chef, but Amritsar’s Vikas Khanna wears his Indianness on his sleeve. Launched on April 1, his Feed India Initiative has ensured that millions do not go hungry or without basics during the pandemic 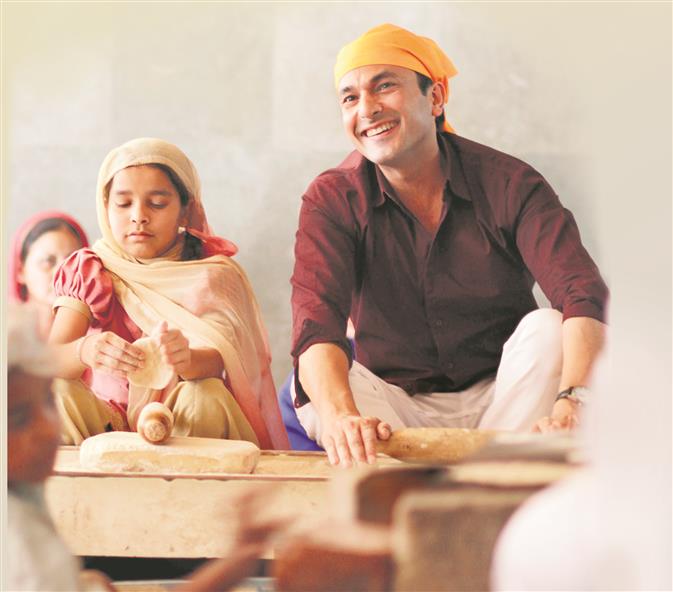 In another two days, Feed India Initiative will have completed five months of its tenacious journey of feeding millions in more than 135 cities across India during the pandemic. The man spearheading this campaign is New York-based Vikas Khanna, a Michelin-starred chef for the world, but a humble man at heart from ‘Guru ki Nagri’ Amritsar.

Read also: ‘What he is doing comes from that space – langar sewa’

The campaign has crossed the 30 million-meal (cooked and dry ration) mark, but food is not the only thing Vikas and his team of volunteers are providing. Also on the list are 400,000 slippers, 3 million sanitary pads and 2 million masks. While he’s been too busy to calculate the overall cost, “on a rough estimate, it should be around $10 million”, says Vikas. The campaign, however, has zero-administrative cost, as it is being managed by a team of 60 volunteers, in India and the US.

From his house in Manhattan, he shares an interesting anecdote that led to the foundation of this vast effort. In March-end, he received a mail from an old-age home in India, seeking donation for its inmates, stuck during the lockdown. He immediately transferred some money, but the mail turned out to be a spam. However, it set him thinking about the plight of the less fortunate during the pandemic. Having been associated with such endeavours before, he was aware that most orphanages, old-age homes, and other such institutes run from month to month in terms of rations, donations, etc, and would be hugely affected by the pandemic. And that’s how the idea of Feed India came into being.

Feed India, or Barkat as he calls it, started with a single tweet on April 1. Vikas asked his 2.3 million followers on Twitter to go to their neighbourhood orphanages, old-age homes, leprosy centres and check if the inmates needed ration or food.

Soon, the messages grew faster than the Covid cases across India, and he and his volunteers were quick to respond.

A basic kit of essentials, including hygiene essentials, was put together. Each bag consisted of ration items, essential supplies, sanitisers, sanitary napkins, detergent and sometimes even chocolate, along with slippers, water bottles, etc.

From institutes of destitution, his campaign soon extended to migrants walking home, street vendors, Mumbai’s dabbawalas, boatmen and craftsmen in Varanasi, inmates of widow ashrams, people with disabilities, transgenders, sex workers, AIDS patients, anyone and everyone in need.

As Vikas was managing everything from the US, there were some logistical issues — unscrupulous vendors, dishonest suppliers, vanishing supply trucks, payments that had to be paid twice. He almost gave up but his mother — the anchor who keeps him rooted, as he puts it — reminded him how having achieved his dream of becoming a top chef despite odds, he could not be scared of these little singes.

He reached out to the National Disaster Response Force (NDRF) in mid-April. By then, the NDRF had already been working with the pandemic-affected in different states.

But didn’t the NDRF find the proposal of a celebrity chef sitting across oceans a little farfetched? Says Satya Narayan Pradhan, Director-General of the NDRF, “His commitment, authenticity and straight-forwardness came across loud and clear. And this partnership has moved from strength to strength because of the synergy in sincerity from both sides.”

Vikas has spent millions from his own funds to kickstart the campaign and keep it going. Collaborations, in both cash and kind, with brands came much later. India Gate rice management was the first to approach him in mid-April. Since then, there have more than 50 Indian and international collaborators, including Tata, Procter & Gamble, Paytm, Patanjali, etc. The latest on board is Crown Rice. It has committed 1 lakh kg of rice for Feed India’s Ganesh Chaturthi prasadam drive in Mumbai on September 1.

Many individuals have also pitched in, including artist and architect Tarik Currimbhoy, Sandie Tillotson (NuSkin), Heather Ibrahim-Leathers (Global Fund for Widows), social entrepreneur Payal Tulsiyan, and of course, the man of the moment, Sonu Sood. The two Punjabi boys came together to help migrants reach home — Sonu was taking care of transportation and Vikas was providing them with meals on the way. For this initiative, Vikas had come up with an innovative plan. He reached out to Bharat Petroleum Corporation Limited and converted at least 100 fuel stations on the highways of UP, MP and Maharashtra into kitchens from where the weary migrants could have a hot meal on the go.

The one lesson from the pandemic, says Vikas, has been the “resilience of mankind and its solidarity”.

With the end of the pandemic nowhere in sight, how long can he sustain Feed India? “I signed two book deals last week, and the proceeds will go into funding the drive. More brands are coming forward. I tweeted about it last week and there were 16 mails within 30 minutes.”

On what makes him go on, he says, “My faith in my Guru, Guru Nanak Dev, and my promise to my mother that I will see it through. She didn’t raise a quitter.” She did not.