Let’s do it the eco-friendly way 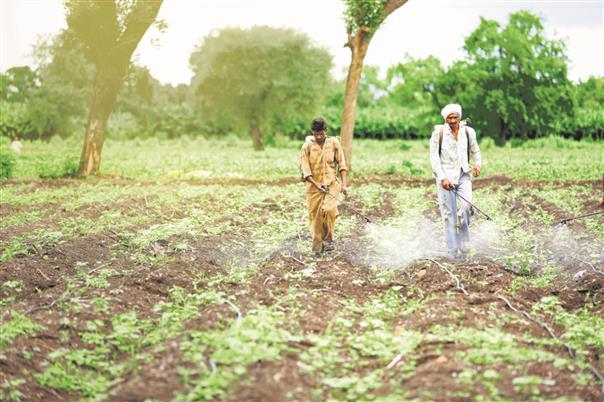 PESTICIDES are toxic chemicals applied to crops for killing insect pests, plant pathogens and weeds. Less than one per cent of the more than one million identified species of insects are ‘pests’. Rather, a large number of insect species provide essential ecosystem services as plant pollinators, nutrient recyclers, trash burners, natural enemies of pests, and act as food for birds, fishes, amphibians, reptiles and small mammals, as components of food chains and food webs. Without these services, agriculture, forests and even human civilisation as a whole will not survive for long. Therefore, the pesticides need to be applied with utmost caution to minimise their adverse impact on humans, non-target organisms and the environment.

Rachel Carson, in her monumental book Silent Spring (1962), effectively focused the attention of the public, scientists and policy-makers on the consequences of the indiscriminate use of pesticides and prompted governments around the world to start regulating the use of pesticides.

In India, the Insecticides Act, 1968, regulates the manufacture, import, sale, and use of pesticides. Under the Act, the Government of India has over the years banned the production and use of 40 pesticides. The Ministry of Agriculture and Farmers’ Welfare constituted an expert committee headed by Anupam Varma in 2013 to review the use of 66 pesticides, which were already banned or restricted in other countries. Based on the committee’s recommendations, followed by the regulators’ decision and its own decision on the subject, the ministry issued a draft order on May 14, 2020, banning 27 pesticides in the country. Stakeholders were given 45 days (later extended by another 45 days) to file their response to the draft order.

In view of the order, state agricultural universities (SAUs) are making efforts to replace the banned items with alternative pesticides in their recommendations for the farmers. This is not a desirable approach to integrated pest management (IPM). In Europe, when many chemical pesticides were banned by the European Food Safety Authority, most of these were replaced by the release of natural enemies for biological control of pests. In India also, there is a need to replace the banned chemical pesticides with non-chemical tactics, especially pest-resistant genotypes, cultural control practices and biological control, and shift crop protection steadily towards bio-intensive approaches. Ecosystem biodiversity in the form of inter-crops, trap crops, and plants in adjoining fields/non-cropped areas would help to keep populations of most pests at the sub-economic level. About 350 species of natural enemies (predators, entomopathogens) are commercially produced and utilised in crop management around the world. In India, only about a dozen such species are being mass-multiplied.

There is unlikely to be an adverse impact of the banning of 27 pesticides on agricultural production because safer alternatives are available in the market. But agricultural universities need to be more stringent while recommending new pesticides for crop protection. Data on the impact of new chemicals on all non-target organisms, especially pollinators, natural enemies, secondary pests and microbiota, must be generated for informed decisions on new recommendations.

In Punjab, the only significant challenge to replacing the banned pesticides appears to be herbicide pendimethalin, which is widely used as a pre-emergence treatment in direct-seeded rice and other crops. The cultural method of stale seed bed is useful and needs to be popularised among farmers as a component of integrated weed management (IWM). It helps to significantly lower the weed density in the field.

The banning of the 27 pesticides presents a golden opportunity to agricultural universities, state departments of agriculture and the farming community to take the big leap required towards bio-intensive IPM for environmentally safe crop protection. This can be a win-win situation for farmers and consumers, besides the environment.