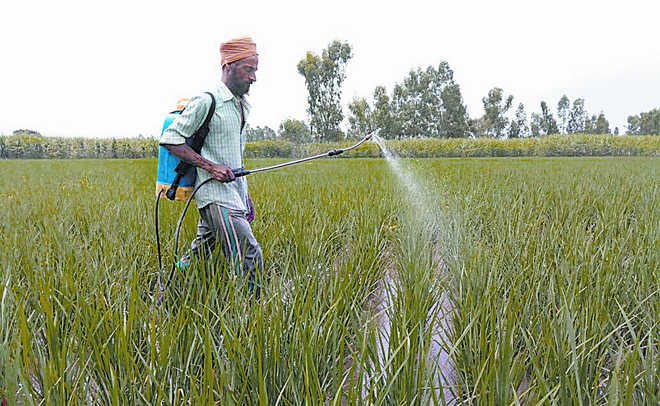 THE Centre’s move to ban 27 widely used pesticides (12 insecticides, eight fungicides and seven herbicides) may have little immediate impact on agriculture and farmers. As of now, a draft order has been issued, banning the manufacturing and sale of these pesticides on the grounds of the risk they pose to humans and animals.

These pesticides are used on almost all crops — paddy, wheat, maize, sugarcane and cotton, besides vegetables and fruits. A large number of countries have already banned these pesticides and the Union government is under pressure from environmentalists to ban these in India. The debate, however, now centres around the alternatives available to farmers, and also whether these alternatives are economically viable for farmers, already reeling under ever-increasing input costs and low price realisation for their produce. There are no alternatives available in the market for at least one-third of these pesticides. As an alternative to pesticides, Punjab has been promoting Integrated Pest Management (IPM) techniques to control pests.

“Eh dawaiyan di varton saadi majboori hai... nahin tan sari fasal kharab ho jaoo. If the substitutes are available, and that too at a reasonable price, farmers will opt for the same. But from what we hear, the alternatives are almost double the cost of these pesticides proposed to be banned. Also, where is the guarantee that the substitutes are disease-resistant and will ensure that the yield of the crop remains as high as with the use of these 27 pesticides,” says farmer activist Randeep Singh of Sangrur district.

Pesticide use is among the highest in Punjab, after Uttar Pradesh and Maharashtra. Though Punjab has a much smaller area, its pesticide usage accounts for almost eight per cent of the national figure. Almost 4,930 metric tonnes (MT) of chemical pesticides were used in the state in 2019-20, as per figures available from the Ministry of Agriculture and Farmers’ Welfare. According to the Punjab Farmers and Farm Workers’ Commission, the state has seen a steady decline in the use of chemical pesticides. Punjab used 5,689 MT of chemical pesticides in 2014-15 and 5,543 MT in 2018-19.

Ajay Vir Jakhar, chairman of the Commission, says that the draft agriculture policy for Punjab clearly defines that the pesticide usage is to be reduced by 10 per cent each year. “Through counselling and other agriculture extension activities, we are gaining success and cutting down on pesticide usage for the past three years. A ban will not make these 27 pesticides vanish from the markets as huge stockpiles are being created by manufacturers and dealers. The shift to safer and cheaper alternatives will take time as the agriculture research system is not geared for it and is only offering chemical alternatives,” he says.

Baljit Singh, a farmer of Jatana Khurd in Mansa district, says the government should look at supplying the substitutes at reasonable prices through cooperative societies. “It will build trust and farmers will opt for the safer pesticides faster,” he says, adding that quality control and regular monitoring of the efficacy of substitutes would also help boost farmers’ confidence.

Farmer activist Ramandeep Singh Mann feels that the ban on pesticides, without viable substitutes, could gravely impact the farm economy. “All substitutes should be thoroughly examined, researched and experimented with before the farmers are asked to shift to these. The shift has to be gradual, so a complete immediate ban may not be in the best interests of all stakeholders,” he says.

Pesticide use is among the highest in Punjab, after Uttar Pradesh and Maharashtra. The state accounts for almost 8% of the national usage. Almost 4,930 metric tonnes (MT) of chemical pesticides were used in the state in 2019-20, down from 5,543 MT in 2018-19. The state’s target is to reduce usage by 10% every year.