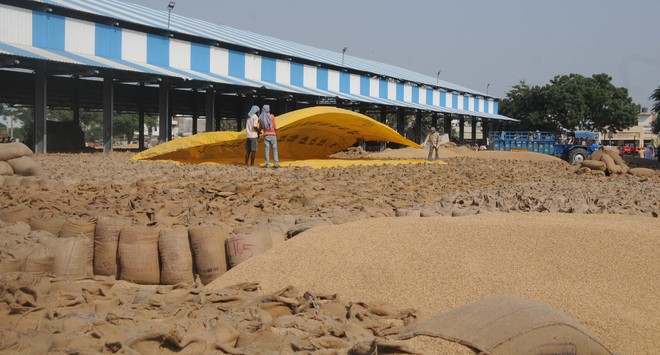 The Bhartiya Kisan Union (Charuni) has raised questions over linking of mandis at Pehowa and Gumthala with Adani silo at Solumajra village in Kaithal.

The union claimed that the move of the Food Corporation of India (FCI) would have an adverse effect on not only farmers and traders, but also on labourers and other people involved in the procurement process.

The divisional office of the FCI in a letter issued to procurement agencies, including Food and Civil Supplies, Hafed, Haryana Agro Industries Corporation and State Warehousing Corporation in Kurukshetra and Kaithal, regarding direct delivery in bulk from farmers to Adani silo has stated that for the action plan for wheat procurement and storage of rabi marketing season 2022-23, it has been informed to the agencies head not to store wheat stock in CAP (covered and plinth)/open plinths from next season onwards as per the instructions of higher offices.

BKU (Charuni) spokesman Prince Waraich, said, “The FCI has linked Pehowa and Gumthala grain markets with Adani silo. The FCI has also directed the procurement agencies not to supply gunny bags in these markets. Farmers will be forced to take their produce to Adani silo, which is far away from present markets.” —