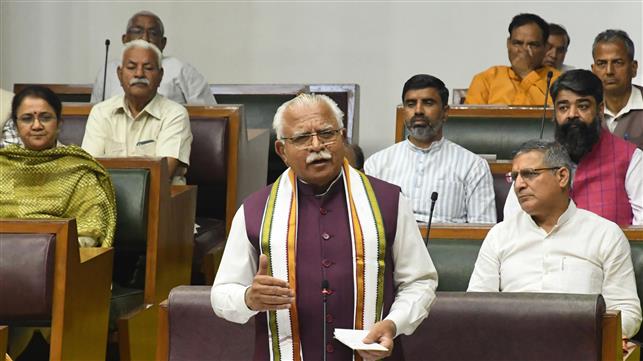 Going all guns blazing against Punjab after it staked claim on Chandigarh, the Haryana Assembly today unanimously passed a resolution reiterating its right on the Union Territory. It also urged the Centre to intervene in the construction of Sutlej-Yamuna Link (SYL) canal, prevail over Punjab to withdraw its case on Hansi-Butana Link canal and ensure proportion of officers from Haryana in the state capital is not disturbed.

During the one-day special session, Chief Minister Manohar Lal Khattar moved the resolution, urging the Centre against any move that would “disturb the existing balance” till all issues from the reorganisation of Punjab were settled. During the three-hour-long discussion, as many as 25 MLAs spoke on the resolution, which mentioned the Indira Gandhi Agreement, Rajiv-Longowal Accord and Venkatramaiah Commission had accepted the claim of Haryana to Hindi-speaking areas of Punjab.

The House resolved that the amendment to the Bhakra Beas Management Board rules by the Centre for the appointment of whole-time members was against the spirit of the Punjab Reorganisation Act, 1966. The demand for a separate High Court in keeping with the constitutional provisions also found mention. On stalemate over the SYL canal since the Supreme Court-directed meeting between the CMs of the two states has not been held, Khattar said Haryana would soon take up the matter. “The issue cannot be resolved at the state level. We will seek an execution order from the court,” he said.

Referring to the Shah Commission, Khattar said it had asked to give Hindi-speaking villages of Kharar tehsil and Chandigarh to Haryana. “On June 9, 1966, in a meeting of the Union Cabinet, Chandigarh was declared a Union Territory. It was also made the capital of both Punjab and Haryana. After that different agreements were reached, but the issue was not resolved,” he said.

Leader of Opposition Bhupinder Singh Hooda said Chandigarh should have been given to Haryana as per the Shah Commission recommendations. In a pointed reference to Punjab’s political posturing, Hooda said, “Punjab is our elder brother, but we can’t accept it as a big brother. Its resolution disturbs the brotherhood between the two states.”

Hooda suggested Haryana should demand that the Chandigarh Administrator should also be appointed on rotation from both states. “Why should the Administrator always be from Punjab?” he asked. Other members said the state must also stake claim to Panjab University since it could not be the “exclusive right” of Punjab.

Punjab should not disrupt communal harmony between the two states by taking such undemocratic steps. — Bhupinder Singh Hooda, Leader of Opposition