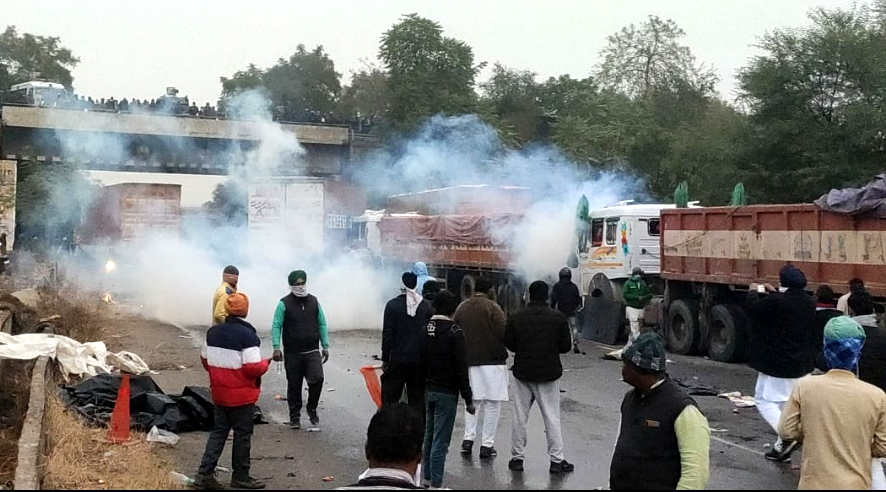 A clash between protesting farmers camping on the Delhi-Jaipur highway near Bhudla-Sangwari village for the past three days and police was witnessed on Sunday when the former reached Masani barrage near Dharuhera town after covering 4 km from their previous halt.

The police lobbed teargas shells to stop farmers. A tractor caught fire during the clash but the blaze was doused by farmers. The protesters were adamant on going ahead while the police had blocked the service lane. The farmers were trying to remove the blockade till the filing of this report.

Sources said many farmers from the Tikri border today joined the camp of another group of farmers at Bhudla-Sangwari village and decided to go ahead. In the evening, they removed police barricades near their camp and moved ahead. The police resisted them initially, but let them go later. The protesters were, thereafter, stopped at Masani barrage as police used teargas shells, sources added.

Happy Singh, a farmer from Rajasthan, told The Tribune that a tractor-trailer caught fire due to teargas shells. Some blankets and quilts also got burnt while some farmers who were sitting inside saved their life by jumping off the trailer. They also managed to take out an LPG cylinder, he claimed.

“We wanted to go to Delhi peacefully, but the police lobbed teargas shells and used force on us to stop us from moving ahead,” said a protesting farmer, adding that they are vowed to go to Delhi and would do it come what may.

On eve of talks with farmers, Tomar meets Rajnath to discuss govt strategy to end deadlock

The sudden clash resulted in the blockade at the highway. Long queues of vehicles were witnessed, causing inconvenience to commuters who had to use alternative routes to reach their respective destinations.

Meanwhile, ‘Chetna Yatra’ being taken out by the farmers belonging to Bhartiya Kisan Union (Ugrahan) reached the Shahjahanpur-Khera border in Rajasthan in the evening. They spent Saturday night at Gangaicha Jat toll plaza near Rewari city in the open amid bone-chilling cold. Locals provided them food and tea. The yatra would return to Tikri on Monday.

Kavita Arya, a farmer leader, said they welcomed the Chetna Yatra at the Shahjahanpur border and made special arrangements for food and stay for farmers.