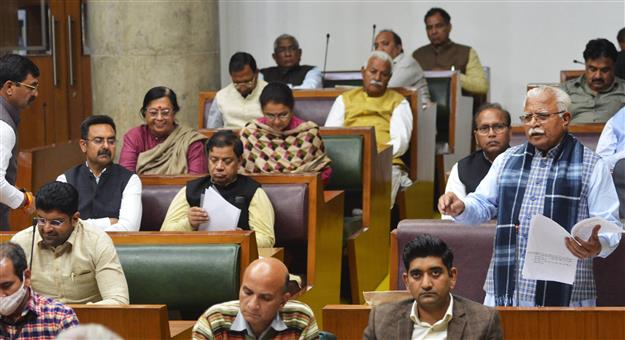 Chief Minister Manohar Lal Khattar today hit back at the Opposition while replying to various issues point-wise in a speech punctuated with couplets.

“Jo udne ki chhah rakhte hain, vo girne se nahin darte (Those who wish to fly are not scared of falling down),” taking a shot at the Congress. “The Opposition never says what is right,” he said, accusing them of being arrogant during a discussion on the Governor’s address.

On the amended Bharat Beas Management Board (BBMB) rules, Khattar said he had written to Union Home Minister that both Punjab and Haryana had objections to these and had called for restoring the earlier system. Hooda said an all-party meeting should have been called on the issue. He stressed that Haryana’s membership should have been assured, to which the CM also agreed.

On the domicile issue, where a five-year stay in Haryana is now required instead of 15 years, the CM said when the issue of 75 per cent reservation for local youths in the industry came up for discussion with industrialists, it was one of their demands. “They pointed out that a number of their employees come from outside…We couldn’t impose the reservation forcefully,” he added. He justified the reduction in the period, citing it was three years in Delhi and UP and five years in Madhya Pradesh and Rajasthan.

Congress chief whip BB Batra stood up and said it would also hamper the chances of Haryana natives in the reservation of SCs and BCs in government jobs.

Lambasting the reports of the Centre for Monitoring Indian Economy as untrue, Khattar said, “For a month in 2017, it reflected two per cent unemployment in the state. Since then, it has been showing a rising trend. The unemployment figure was 34.1 per cent in December 2021. Just a month later, in January 2022, unemployment was shown at 23.4 per cent. How come there has been a drop of 11 per cent in just one month?”

At this, Hooda questioned him that UP CM Yogi Adityanath had been celebrating CMIE figures of unemployment in his state. “How can there be two standards,” he asked.

On the domicile issue, in which a five-year stay in Haryana is now required instead of 15 years, the CM justified it, citing it was three years in Delhi and Uttar Pradesh and five years in Madhya Pradesh and Rajasthan. He said industrialists said most of their workers came from outside.