50 people missing as bus, bolero, several other vehicles under debris

Distraught relatives of passengers of the HRTC bus buried under debris and boulders are losing hope of survival of their kin with each passing minute and cursing the administration for alleged delay in rescue operations from Chaura (Shimla) side. 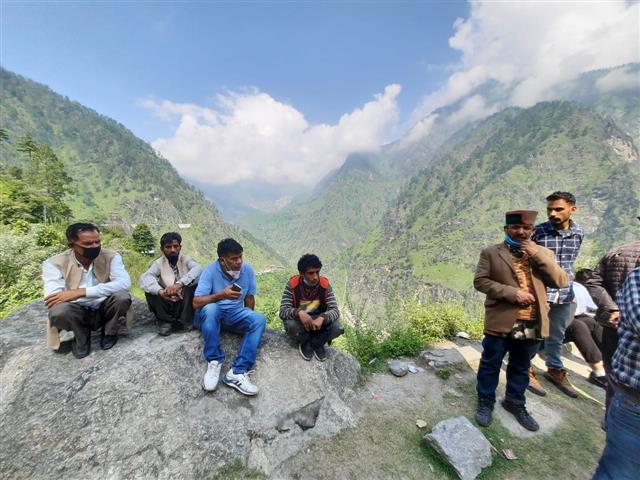 "The focus of the rescue agencies was on opening the national highway, and not tracing the bus. The JCB machine reached the spot around 6 pm. My father Hukam Singh boarded the bus from Powari. After sometime, we saw on Facebook that the bus was buried in the landslide. We were shocked and immediately rushed to the spot from Rampur and were stunned to see that no rescue operations had started," laments Gabbar Singh.

The rescue operations had started immidiately from Negualsari side, but it took almost six hours for the administration to deploy a JCB from Chaura side, he said. "Several lives could have been saved had the rescue officials acted swiftly. Those trapped were simply left to die. Those responsible for the negligence should be punished sternly," he demanded.

Geet Ram, whose son Mehar Chand too is believed to be trapped, said his son was returning from his in-laws house and was in the bus. "Our hearts are sinking with each passing minute as hopes of survival are diminishing. Mehar has two small kids. It's impossible for me to think of a future without him," he said, his voice choking with emotions.

Prab Lal was another passenger who had boarded the bus from Cholling to Rampur. His brother Ravi Kumat appeared crestfallen. "We were hopeful he will survive, but the bus could be traced only this morning... Why was the drone survey limited to the main highway," he said, blaming the administration for the alleged delay in beginning the rescue operation.

A similar anger and anxiety was writ large on the faces of others whose relatives are untraced, almost a day after the tragedy on the Kinnaur-Shimla highway. They, however, are helpless.

Kinnaur DC Abid Hussain Sadiq said the entire area was surveyed through drone and rescue operations were conducted in a planned manner. The anger of relatives was natural as they were worried about their kin, he said, admitting there was some dalay to start rescue work from the Chaura side.