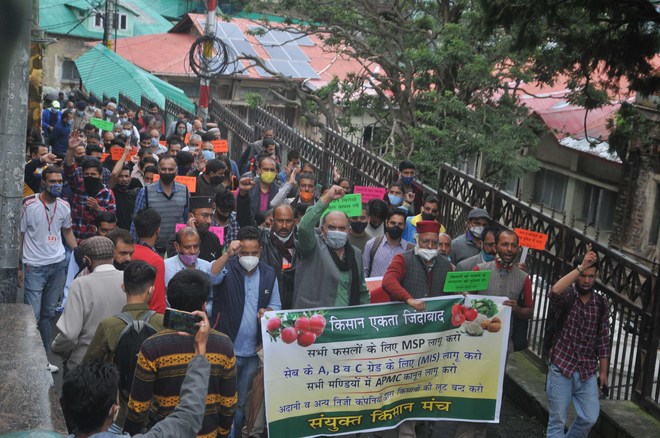 Activists of the Sanyukt Kisan Manch take out a rally in Shimla on Monday. tribune photo: Amit Kanwar

The Sanyukt Kisan Manch, a group of over 15 organisations of apple and vegetable growers, today held protests at several places in apple-growing districts across the state. Demanding reforms for better remuneration for apple and vegetables through a 13-point memorandum submitted to the government, the SKM threatened to launch a bigger protest across the state on September 27 in case the government did not fulfil their demands.

Their major demands included the introduction of the market intervention scheme for apple on the lines of Kashmir, MSP for all fruits and crops produced in the state, strict implementation of the APMC Act 2005, reservation of 25 per cent space for the produce of local farmers in the corporate CA stores, etc.

Demand market intervention scheme on the lines of Kashmir

“The protest was extremely successful. Even though apple harvesting is on, thousands joined the protest. In fact, this is the biggest protest over apple issues since 1990,” said SKM convener Harish Chauhan.

Chauhan said that thanks to the crash in apple market this season, the Himachal growers and farmers are also becoming sympathetic towards the framers agitation against the three farm laws. “Apple growers are gradually understanding the threat the three farm laws hold for them,” said Chauhan, who incidentally has a BJP background.

In Matiana, CPM MLA Rakesh Singha led the protest. “If the Centre can procure apple in Kashmir through MIS offering remunerative prices, why it can’t do it in Himachal? Is Himachal in Pakistan?” he asked in his trademark belligerent style.

In Shimla, Himachal Kisan Sabha leaders Onkar Shad and Kuldeep Tanwar led the protest. While Onkar Shad highlighted the issues faced by the apple growers, Tanwar highlighted the plight of vegetable growers. “Sometimes, vegetables like cabbage and cauliflowers, capsicum, french beans and tomatoes do not get remunerative prices. Almost every year, the prices of one or two vegetables crash completely and farmers face massive losses,” said Tanwar.