Make up for shortage of labourers from Bihar, West Bengal due to pandemic 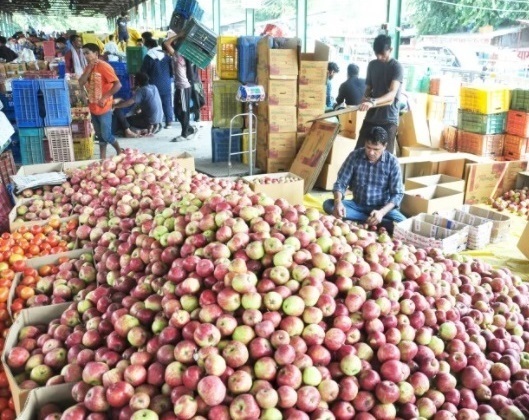 Labourers pack apples at the Bhuntar marketing yard in Kullu.

As the apple season peaks in the district, labourers from Kullu, Mandi, Kangra, Chamba and Bilaspur have come to the rescue of orchardists, who are facing a severe shortage of workers who have not come from Bihar, West Bengal and Nepal owing to the pandemic.

Kullu Fruit Growers’ Association president Prem Sharma says that skilled labour is required for plucking, packaging and transportation of apples. The wages had shot up due to the manpower shortage last year and farmers were worried about the same issues this year as well. However, a large number of youths from all over the state have come to their rescue. They can be seen working in various market yards, orchards and temporary roadside tents set up for the season in Kullu, Kharal, Manikaran, Ujhi, Sainj and Banjar valleys.

Many youths have come to Kullu to work in the orchards during the fruit season. They are being paid Rs 500 daily, along with food and beverages. Some big orchardists are providing them accommodation as well.

Ashok, Mahinder and Sunil, all natives of Chamba, say that they are earning well by working in the orchards and market yards. Ramesh from Mandi and Prakash from Kangra say that the apple season has provided them employment during the Covid period.

Only skilled packers are doing grading and packaging, especially if the produce is to be sent to other states.

Rahul, an orchardist, says that arhtiyas (commission agents) in the mandis charge the growers for per crate (20 kg) labour. They have to bear the cost of plucking, packaging and transportation, too. This year, the prices of cartons and other packaging material have also increased whereas the price of apples have come down. The orchardists are not able to even cover their expenses. The government should step in to rescue them as horticulture is the backbone of the state’s economy and also provides employment to a large number of people, he adds.

Also raises the issue of extended jurisdiction of Border Sec...