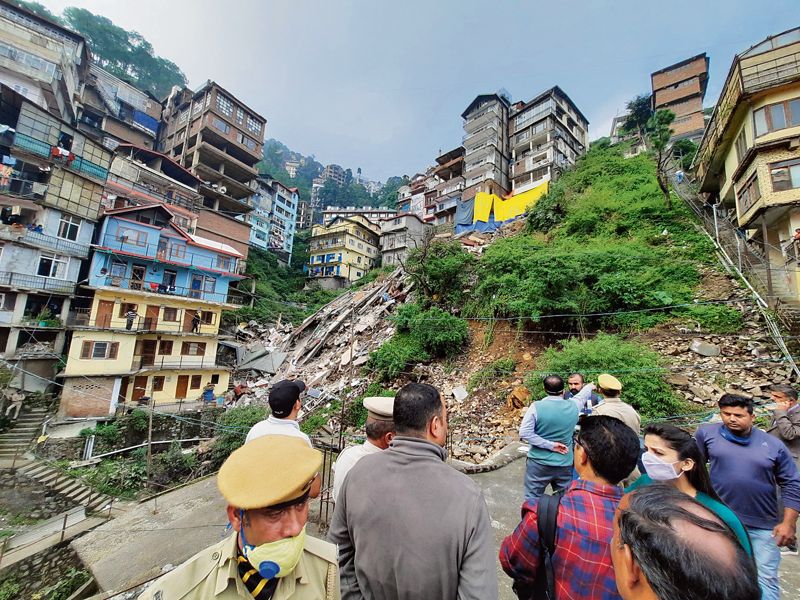 Locals gather near the debris of the building which collapsed at Kachi Ghati in Shimla. Amit Kanwar

The government today constituted a fact-finding committee to look into the reasons of the collapse of a seven-storey building in Kachi Ghati area of the town yesterday, besides making recommendations to prevent recurrence of such mishaps.

The committee, comprising Shimla Deputy Commissioner, director of Town and Country Planning (TCP) Department and commissioner of Shimla Municipal Corporation (SMC) has been asked to submit its report by October 7.

“The committee has also been asked to make recommendations to ensure that such incidents do not happen again. Besides, they can rope in any expert in case they feel their opinion is required,” said Rajneesh, Principal Secretary, TCP and Urban Development. He said the government had taken a serious note of the incident and all corrective measures would be taken to prevent recurrence of such mishaps.

The building had been granted approval by the Nagar Panchayat in 2003, before the area was brought under Special Area Development Authority (SADA) the same year. The area of Kachi Ghati was merged into Shimla MC in 2006. “On bare perusal of the record, permission was granted by Nagar Panchayat for a six-storey structure. The three-member committee will look into all other aspects which led to the collapse,” said Ashish Kohli, Commissioner, Shimla Municipal Corporation.

The multi-storied building, including a sloping roof (attic) and a basement, collapsed yesterday after its foundation was weakened due to seepage of water. Though there was no loss of life, the collapse threatened at least five nearby buildings, including a hotel, all of which have been evacuated, said Deputy Commissioner Aditya Negi.

The incident comes within a week of the rap from NGT, which rejected state government’s plea to allow construction of a lift, ramp, visitors’ room and parking at the secretariat. The NGT also refused any relaxation in the limit of two and a half storeys fixed by it earlier, within the state capital. The courts have also barred the government from bringing about yet another retention policy, with six already being there.

Out of the over 25,000 unauthorised constructions in the state awaiting regularisation, a majority are located in the Shimla Planning Area and that too on steep slopes and sliding zones. The fact that the state capital is still expanding on the basis of the 1979 Interim Development Plan (IDP) speaks volumes of the scant regard being paid towards regulated and planned growth by successive regimes, despite adverse remarks by the courts.