Accuses him of ‘playing with the sentiments of Hindus’ 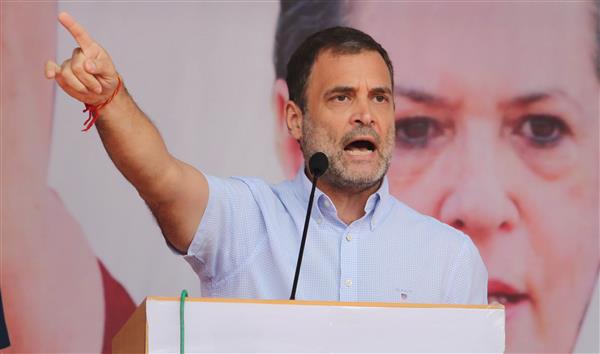 The BJP on Friday slammed Rahul Gandhi, pinning the woes of Kashmiri pandits on “appeasement politics” of his party, the Congress.

The ruling party, in a statement, said that Rahul Gandhi while speaking in Jammu said that he too was a Kashmiri Pandit and he was pained by the plight of Kashmiris and Kashmiri Pandits but “astonishingly very conveniently forgot that the woes of the Kashmiri Pandits were because of the politics of appeasement of Congress and like-minded parties”.

“The Congress for its petty vote bank politics sacrificed not only the Kashmiri Pandits but also the development of Kashmir,” the saffron party said, also accusing him of “playing with the sentiments of the Hindus by saying that the powers of Goddess Durga, Saraswati and Lakshmi have decreased after Modi ji came to power”.

He also said the “hand” of Congress is the hand of “Wahe Guru”, the BJP said, claiming that he has “hurt” sentiments of millions of Sikhs and Hindus across the world and “should apologise for this”.

“Rahul had the audacity of comparing GST with Ma Lakshmi. In the past had compared the same with Gabbar Singh. This is unforgivable. Rahul has yet again done what he’s best at …immaturity and irresponsibility,” the saffron party claimed.

The BJP said that there was a time when on behest of the Gandhi family the then PM of India, Dr Manmohan Singh, “even hugged separatist leaders”.

“The problems of Jammu and Kashmir are the legacy of the Gandhi family. It was Jawaharlal Nehru who was responsible for the problems of Kashmir.

“Ironically when Home Minister Amit Shah was discussing abrogation of Article 370, Leader of the Party (in the Lok Sabha) Adhir Ranjan Chaudhary, said that it was a bilateral affair and should not be discussed without the mandate of Pakistan. This is the real nature of the Congress Party, shedding crocodile tears while it during its tenure destroyed Kashmir,” the BJP said.