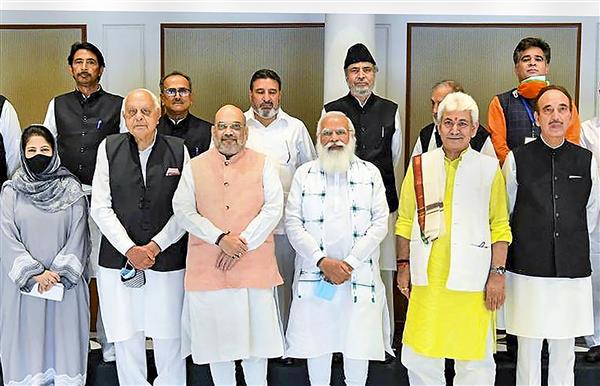 Gupkar alliance members will take individual call on whether or not to meet the Delimitation Commission.

On the eve of the Delimitation Commission’s four-day visit to J&K, the People’s Alliance for Gupkar Declaration (PAGD) expressed disappointment at the outcome of Prime Minister Narendra Modi’s recent outreach and said full statehood must be restored before Assembly elections are held.

Though the six-party grouping jointly lamented the absence of confidence-building measures on the part of the Centre in terms of ending “suppression” in the UT, they left it to individual parties to decide on whether or not to meet the Delimitation Commission. The commission has sent separate invitations to J&K outfits.

PDP chief Mehbooba Mufti, when contacted, said she was discussing the commission’s invitation with her colleagues.

PAGD spokesperson and CPM leader MY Tarigami told The Tribune that his party would meet the commission both in Srinagar and Jammu. “The PAGD did not take a collective call on the commission’s invitations and decided that allies should decide individually,” Tarigami said, indicating a general willingness on the part of Gupkar members to join the delimitation process while continuing to seek full statehood before elections.

PDP chief Mehbooba Mufti, when contacted, said she was discussing the commission’s invitation with her colleagues. NC spokesperson Imran Dar too said deliberations were underway in the matter.

The PAGD, meanwhile, resolved to engage all J&K parties and the civil society on the issue of full statehood before elections while reiterating to fight for the restoration of special status through legal and political means.

“All PAGD members expressed disappointed at the outcome of the Delhi meeting, especially over the absence of confidence-building measures such as releasing political and other prisoners from jails and taking concrete steps to end the siege and atmosphere of suppression that has choked J&K since 2019,” alliance spokesperson Tarigami said, steering clear of welcoming the PM’s outreach, something Gupkar allies had done on June 24 after the meeting in Delhi. Tarigami said restoration of statehood was a commitment the BJP made in Parliament and it must honour its word now.

“So any Assembly election must be held only after the restoration of full statehood for J&K. To this end, the PAGD has decided to reach out to other political parties in J&K to have a common position on the issue,” said Tarigami.

The PAGD met on Sunday evening under the chairmanship of Farooq Abdullah at his Srinagar residence.

The People’s Conference and J&K Apni Party are expected to meet the Delimitation Commission.