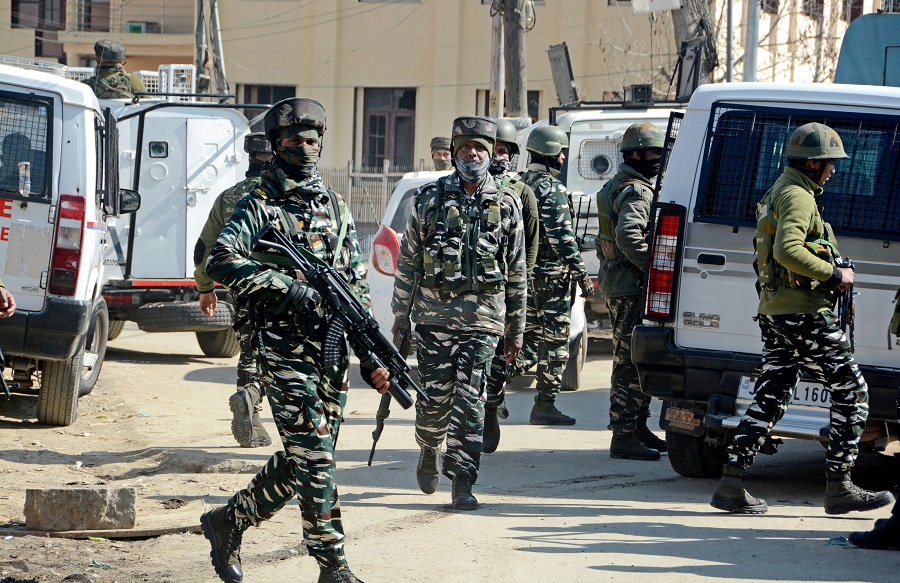 Security personnel conduct a cordon and search operation at the Baghat Chowk in Srinagar on Friday. PTI

Jammu and Kashmir political leaders, including former Chief Ministers Omar Abdullah and Mehbooba Mufti, condemned the killing of two unarmed policemen by a terrorist in an upmarket Srinagar area on Friday.

Abdullah, who is also the National Conference vice president, said the attack was "reprehensible" as the two policemen were unarmed and shot from behind.

"I condemn this act of militant violence & send my condolences to the families of these brave men," Omar tweeted.

"What makes this attack even more reprehensible is that SgCT Mohammad Yousuf of Zurhama and Ct Suhail Ahmad of Logripora were unarmed & shot in the back. Senseless & cowardly at the same time," he said.

Two police personnel have reportedly been killed in an attack in Srinagar today. I condemn this act of militant violence & send my condolences to the families of these brave men.

"Condemn the killing of two policemen in the Baghat attack. My heart goes out to their families & loved ones. This cycle of violence serves no cause & begets only misery," she tweeted.

People's Conference led by Sajad Lone also condemned the killing of the policemen.

"We strongly condemn the killing of two policemen in a dastardly and savage act of senseless violence at Baghat today. Our thoughts and prayers are with the families of Suhail Ahmad and Mohd Yusuf in this hour of grief," said the party.

Condemn the killing of two policemen in the Baghat attack. My heart goes out to their families & loved ones. This cycle of violence serves no cause & begets only misery.

Local leaders of the BJP and the Congress also condemned the killings.

BJP leader Altaf Thakur termed the attack an act of cowardice. "There is no place for such cowardly acts and the attackers must be brought to book," he said.

The two constables were on duty at Baghat on the high-security airport road when they were attacked. The terrorist, identified as Saqib, can be seen pulling out an assault rifle hidden inside his ‘pheran', a loose over-garment worn during winters, and pumping bullets at them from a close range. PTI