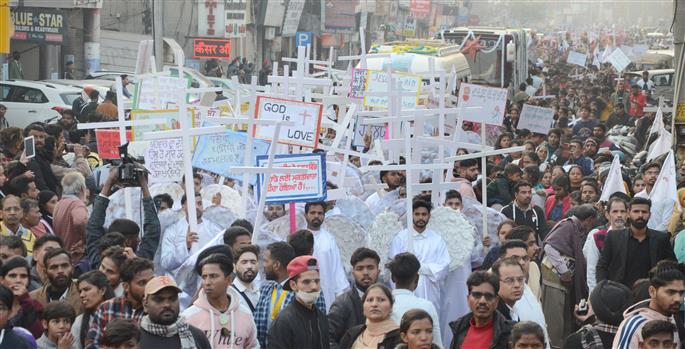 Most of these deras have following from the converted Dalit community. Tribune file

Like other main deras of Punjab, a number of Christian deras that started proliferating in Doaba about three to four years back, too, are learnt to be supporting the BJP this time.

Even though leaders have been holding meetings with pastors of these Pentecostal churches, sources and some video evidences point out that they have recently got more inclined towards the BJP.

Notably, most of these deras have following from the converted Dalit community. The Church of Signs and Wonders led by Pastor Ankur Narula in Khambra, The Church of Glory and Wisdom of Pastor Barjinder Singh in Tajpur village on Nakodar road and The Open Door Church of Pastor Harpreet Deol of Khojewal in Kapurthala are some of the big churches here and have the maximum following from these communities.

John Kotli, who leads the political wing of Narula’s church, had recently joined the BJP in the presence of Union Minister Gajendra Shekhawat. Kotli said: “I joined the party as I feel it is only the leaders like Narendra Modi who can lead the nation.”

Ankur Narula, who runs the biggest church in Jalandhar, had taken out a huge procession in the city on the occasion of Christmas. The procession had several turbaned men, too, holding the cross in their hands. He had invited leaders of all parties for the event but he specifically mentioned it in his speech that day, “People have the notion that we run a church. We are Christians and, hence, we would be opposing the BJP and RSS. But this is not true. There is no reason why we should oppose them.” His video went viral and has got nearly 3 lakh views.

The most interesting part is that the followers of these churches are told not to change their religion on record and just follow Jesus and the principles of Christianity. The idea behind not changing the religion is the fact that by converting to Christianity, they lose their status of being Scheduled Caste and can no longer avail the benefits of the government schemes for the SCs including reservation in jobs, admission in colleges etc.

Churches on their behalf too offer financial assistance, ration and other needs to its followers, who are thus reportedly availing double benefit from either side. The pastors tell their followers: “There is no dharma parivartan at our premises. We do not expect you to add Peter or Masih behind your names. We just want you to consider Jesus as your Father and He will surely heal all your ailments.”