Covid-restricted campaigning ends, it’s now over to voters to pick their representatives from 1,304 candidates

It is not common for traditional parties to open election offices, but they did so this time. Just near the Congress offices in Fatehgarh Sahib and Malerkotla, and SAD offices in Rajpura and Sanaur, a group of people who are usually there for tea and lunch as party workers, after a brief chat, confirmed the political flavour this time is for “change”. 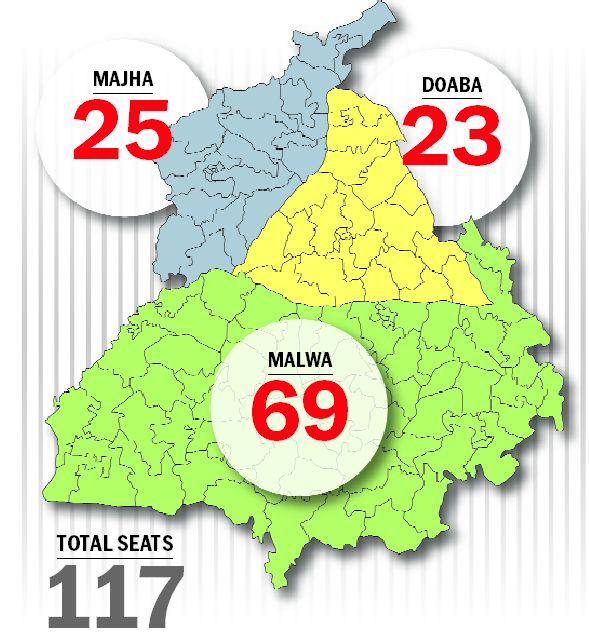 The common man — be it Dalits, farmers, Hindus, Sikhs middle-class or those below the poverty line — in Malwa, considered the backwaters of Punjab, is confused due to the political scenario, taking frequent twists and turns with leaders of the area overnight shifting loyalties. But the common buzzword this time is all about “vote for change”.

A sordid tale of broken promises, undelivered announcements over several decades is getting reflected in the strong presence of AAP candidates on the ground. With BJP pulling out all stops to woo its traditional vote bank in cities, Malwa may throw up some close but surprising results.

“It has been over 50 years of rule by the two traditional parties in Punjab, and still civic amenities, cancer deaths and even farm suicides are common. Let’s try the third option,” says Nikita Dhawan, a first-time voter in the border district of Ferozepur.

From Ludhiana to Khanna, Fatehgarh Sahib to Mohali, Patiala to Sangrur and till Bathinda and Ferozepur in Malwa — the common phrase is “we want change”.

All three chief ministerial faces in Punjab are locked in battles in Malwa, underscoring the importance of the region — AAP’s Bhagwant Mann is contesting from Dhuri, Congress’ Charanjit Singh Channi is in the fray from his second seat of Bhadaur and Akali Dal’s Sukhbir Badal from Jalalabad. Even Punjab Lok Congress chief, former CM Capt Amarinder Singh, is contesting from his citadel of Patiala.

“Despite organisational and political blunders, the AAP has emerged as a substantial player in state’s electoral politics. Neither does it have the organisational network that the SAD has nor traditional cadre like that of the Congress. It is the silence which the AAP is counting on and which unnerves the trio of BJP, SAD and the Congress,” said a political analyst.

The ground support in 2017 had given the AAP reasons to dream of pulling off an improbable victory. The party, however, had to content with only 18 of the 69 seats in the region. But that was enough to go ahead of the SAD-BJP, which won just eight seats. The Congress won 40 seats in Malwa alone, riding on the popularity of Capt Amarinder Singh.

The “mishandling” of the probe into the 2015 sacrilege incidents has dented the party’s image, and the SAD and AAP are eyeing gains. Capt Amarinder floating his own party in understanding with the BJP has only made matters worse for the Congress.

The entry of farmers in the poll fray as candidates from the SSM has created problems for traditional parties as these farmer leaders are eating into their vote share. But this division is working to the advantage of the BJP in urban areas.

“We are yet to get a clear message from our political think-tank, whom to vote for. But I am sure it would not be only for the BJP or SAD. At many places they are dismal fourth and therefore wasting our votes would not help matters. A feedback was sought from the Malwa belt and seat-wise feedback was given,” said a senior dera functionary, preferring anonymity.

(With inputs from Nitin Jain in Ludhiana, Parvesh Sharma in Sangrur, Sukhmeet Bhasin in Bathinda and Anirudh Gupta in Ferozepur)