Next focus will be on strengthening organisation | Meets Jalandhar, Kapurthala leaders 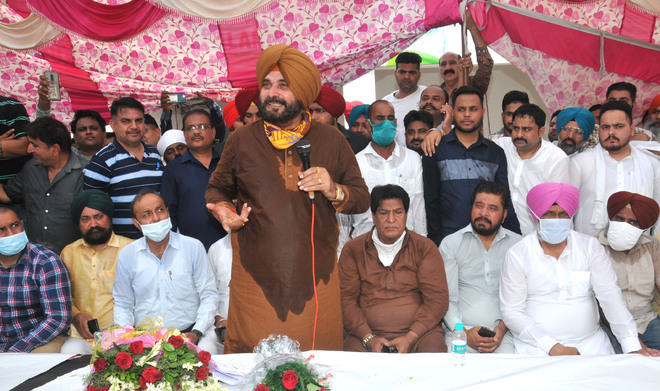 To interact with workers regularly

Chandigarh: To listen to party workers on a regular basis, Navjot Singh Sidhu will meet them at Punjab Congress Bhawan here every Tuesday and Friday. Sidhu will meet workers and leaders from Mohali, Ropar, Fatehgarh Sahib and Sangrur districts on Friday, besides holding talks with Dalit MLAs. A senior party leader said the first priority was announcements of the new district unit presidents by the party high command. TNS

Our domestic consumer is feeling the pinch of higher power tariff because of the wrong PPAs signed by the Badals. But we will get these cancelled. - Navjot Sidhu, PCC  Chief

Addressing mediapersons after meeting party leaders and workers of Jalandhar and Kapurthala, Sidhu said: “Our efforts to push the five-point priority areas have started bearing fruit.”

Expressing satisfaction over the pace of work in the Congress government after months of acrimony with the Chief Minister, Sidhu reiterated the Punjab model on power supply was far better than that of Delhi. Punjab was perhaps the only state to offer Rs 10,000 crore subsidy to people as compared to Delhi, which was offering only Rs 1,700 crore subsidy, he said.

“Our domestic consumer is feeling the pinch of higher power tariff because of the wrong PPAs signed by the Badals owing to which peak time fixed charges have to be doled out throughout the year to private power generation companies. But we will get all these agreements cancelled,” said Sidhu.

He said the government would take up the cancellation of PPAs with the PSPCL with the same vigour as it did in the contentious issue of the river water sharing through the SYL.

Sidhu said he would now be focusing on the task of strengthening the organisation. While Sidhu had reportedly invited 10 workers, including block presidents and councillors, from each Assembly segment for the meeting, hundreds of workers showed up at the venue.

While all six Congress’ Jalandhar MLAs were present, only one of the four MLAs from Kapurthala — Balwinder Dhaliwal of Phagwara — turned up for the event. Rana Gurjeet Singh, Sukhpal Khaira and Navtej Cheema gave the meeting a miss even as some office-bearers, including block presidents and councillors from their Assembly seats, turned up to put across their message.