It may include holding back the three Acts for a couple of months during which a committee, in which CMs and farmer representatives may be included, will hold talks 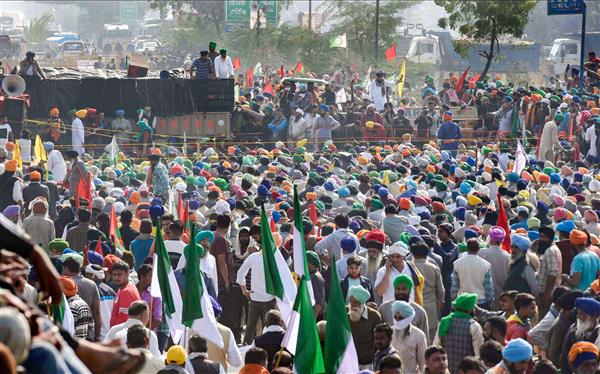 Farmers protest at the Singhu border in Delhi. PTI file

It may include holding back the three Acts for a couple of months during which a committee, in which CMs and farmer representatives may be included, will hold talks.

In the meeting ahead of farmers’ dialogue with Union ministers, Singh and Shah were expected to hold deliberations to work out an amicable solution to the problem.

Meanwhile, regarding their meeting with the Union ministers, farmer leaders say they are concerned only with the Centre. It is not about any political party or the Punjab CM, it is about farmers of the entire country, and not just Punjab, they add.

Sources say the government wants to resolve the issue as soon as possible.

With farmers deciding to intensify the agitation, ahrtias, who are under constant attack from the Centre, have also decided to increase their participation in the agitation against the farm laws.

Ahrtia Association president Ravinder Singh Cheema said an emergency meeting of the state body had decided that 100 buses of farmers, ahrtiyas and labourers would be brought to Delhi in the coming week. Every mandi president has been instructed to make arrangements to supply the buses.

Earlier, it was decided that rations will be provided but with Haryana farmers and Delhi Sikh Gurdwara Management Committee pitching in, the supply of food items from Punjab has been stopped.

Apparently the government is also considering linking MSP to acreage. Farmers with smaller landholdings may be treated differently and there may also be some change in dispute redressal.

Sources say the government is intent on a breakthrough on Thursday and Amit Shah may also join the meeting at some point.

It remains to be seen whether farmers are ready to accept a somewhat softer approach by the Centre.